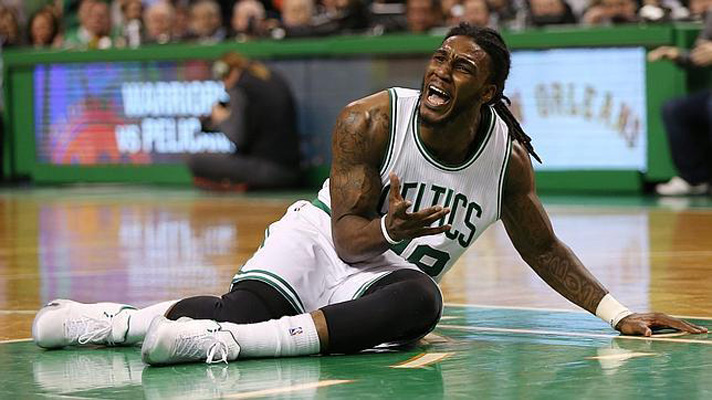 The Cleveland Cavaliers remember all too well what happened to Kevin Love the last time they played at Boston.

But the same goes for Celtics swingman Jae Crowder.

Crowder told reporters Monday he would like to see Cavs guard J.R. Smith apologize for the backhand in Game 4 of the first round of the Eastern Conference playoffs which resulted in a season-ending sprained ACL for Crowder and a two-game suspension for Smith. The two teams will square off Tuesday night in their first meeting since a series which was short in length but long in hard feelings.

“I hope he apologizes tomorrow,” Crowder said. “But if he doesn’t, we’ll play ball.”

Smith rejoined the Cavs over the weekend after missing their 111-76 rout Friday night of the Orlando Magic because of an illness. His blow almost eight months ago led to the injury which occurred when Crowder fell to the floor. Although no surgery was required, Crowder spent the early part of his offseason rehabbing the injury.

Earlier in that game, Love dislocated his left shoulder after getting tangled up with Kelly Olynyk of the Celtics. He had to undergo surgery and missed the remainder of the playoffs.

“Luckily nothing happened [that needed to] be surgically repaired,” Crowder said. “I was just able to get back on the court at the beginning of this year and work with my team to achieve a goal, and that’s to get back where we were last year.”

While Smith and Crowder haven’t apparently closed the door on what happened, such does not seem to be the case between Love and Olynyk. The Celtics’ 7-footer believes there is no lingering resentment.

“I apologized to [Love],” Olynyk said. “He texted me back. So I think we’re all right right now.”

The Celtics don’t come to Cleveland until Feb. 5. Whether Cavs fans have let bygones be bygones by then remains to be seen and heard.

cleveland cavaliersfeaturedjae crowderJR Smithkevin lovenews ticker
← Previous Story Chris Haynes: ‘Strong Possibility’ Kyrie Irving and Iman Shumpert Are Activated by Christmas Day
Next Story → James Jones on LeBron: ‘I Want to See Him Be the Greatest Basketball Player to Ever Play This Game’