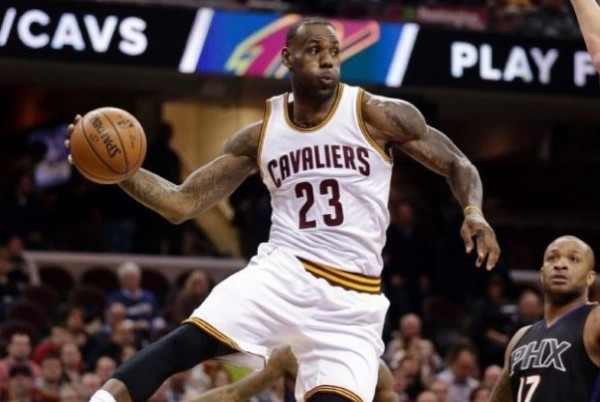 (Cleveland, OH) – Following their 114-107 victory over the Minnesota Timberwolves on Monday night, the Cleveland Cavaliers (32-12) pulled away from the Phoenix Suns (14-33) by a score of 115-93 on Wednesday night at Quicken Loans Arena.

LeBron James was stellar in only 31 minutes on the court, as the 12-time NBA All-Star cruised to 21 points on an excellent 7-of-8 shooting from the floor and a perfect 7-of-7 from the charity stripe to go along with nine assists. Kevin Love (8-of-17 from the field) had a great game as well across the board for Cleveland, as the power forward recorded a double-double with 21 points, 11 rebounds, four assists, two blocks and two steals.

Shooting guard J.R. Smith also had 18 points, four steals and four assists for the Cavs, while small forward Richard Jefferson (4-of-4 from the field and 4-of-5 from the free throw line) came off the bench to score 14 points and dish out three assists.

The Cavs had trouble in the first half with the Suns, as Phoenix led by five points on multiple occasions and only trailed Cleveland 55-50 at halftime.

However, the Cavs went on a 16-0 run that spanned from the end of the second quarter and over three minutes into the second half. Up by as many as 18 points in the third quarter, Cleveland’s lead eventually ballooned to as many as 28 in the final frame.

Heading into tonight’s game, Cavs head coach Tyronn Lue said that he wanted a faster tempo going forward in the season. Cleveland delivered for their new coach against the lowly Suns, as the Cavs set a season high in steals with 12 and tied another with 34 assists on the night.

“It’s tough but I told them at the expense of playing more guys or at the expense of losing a couple games, we’re looking forward to playing in the playoffs and we’ve got to get in shape for the playoffs,” said Lue during his team’s practice on Tuesday. “And I believe that if you’re in shape, it makes you tougher mentally and physically and you can do things harder and better and you don’t give into fatigue.”

James and Smith brought the crowd at the Q to their feet with two exciting alley-oops in the third quarter, most notably when Smith bounced the ball off the backboard for James to throw down a powerful two-handed dunk.

Tyronn Lue says being able to coach the Eastern Conference All-Stars is a tribute to David Blatt and the players. He’s honored to do so.

The Suns, who continued their tailspin towards the bottom of the Western Conference standings, lost their 12th game in a row on the road. However, Phoenix did have a balanced offensive attack as six players scored in double figures on Wednesday night.

Rookie guard Devin Booker, drafted 13th overall in the 2015 NBA Draft out of the University of Kentucky, led Phoenix in scoring with 16 points, five assists and three rebounds. Small forward P.J. Tucker, who made three of his five shots from behind the arc, finished with 13 points and seven rebounds.

Up next, the Cavs will hit the road to take on the Detroit Pistons (25-21) on Friday night at The Palace of Auburn Hills. The contest, which is scheduled to tip off shortly after 7:30 pm ET, will be broadcast live locally on Fox Sports Ohio.