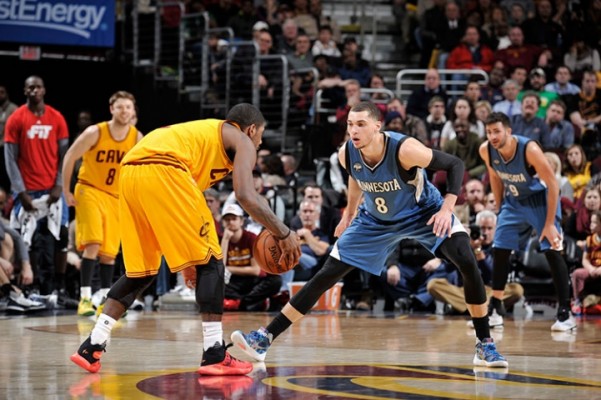 (Cleveland, OH) – Being taken to the limit before finally outlasting their opponent, the Cleveland Cavaliers were able to put an end to their brief one-game losing streak and give new head coach Tyronn Lue his first NBA coaching victory with a hard-fought 114-107 victory over the pesky Minnesota Timberwolves at Quicken Loans Arena on Monday night.

Asked about the milestone, Lue described his emotions and the team’s reaction:

“It felt great to finally get a win,” said Lue. “It means a lot and the team gave me the game ball.”

LeBron James, who led the Cavaliers with 25 points, gave his thoughts on Lue getting his first win and the awarding of the game ball:

“It’s a special moment for any coach, you never forget it,” said James. “That’s the last thing he wanted, he’s so humble.”

Cleveland led by 15 at 91-76 early in the final period, but the Timberwolves refused to go away, nearly tying the game with a little over five minutes left. However, they missed their chance and seven straight points by Tristan Thompson and a three-pointer from Matthew Dellavedova followed to give the Cavs a 104-91 lead with 3:30 to play.

Even after that, the Timberwolves still managed to get their deficit down to four with exactly a minute to play. Then, with 16.5 seconds, they were able to convert a three-point play to make it 110-107. James and Dellavedova then each converted a pair of free throws to clinch the game.

Lue spoke of the reason for the team’s defensive lapses:

“I think on the defensive side, we were tired from running so much more,” said Lue. “Some guys are not used to playing this way, but we just have to get past that.”

Dellavedova was asked about the positives and negatives on the night:

“Our pace was good, but we need to sharpen up our defense.”

One of the keys for the Cavaliers on offense was the outstanding ball movement that resulted in 30 assists on the night. Leading the charge in that area were James and Dellavedova, who ended the night with nine and seven assists, respectively.

James spoke of the push to get the team moving:

“We’re playing at a faster tempo,” said James. “We just want to push the pace. It has to be a staple for us.”

The Cavaliers remain at home for a Wednesday night matchup against the Phoenix Suns, with tipoff set to take place just after 7 p.m. ET.