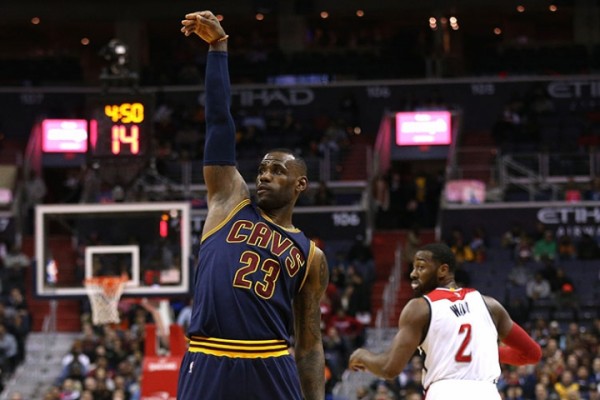 (Washington, DC) – Following their 122-100 drubbing of the Toronto Raptors on Monday night, LeBron James and Kyrie Irving gave yet another friendly reminder to the rest of the NBA: when they’re both healthy, they will indeed do damage to opposing defenses.

The All-Star duo put on a shooting clinic as the Cleveland Cavaliers (24-9) racked up their fifth straight win with an impressive 121-115 victory over the Washington Wizards (15-18) on Wednesday night at Verizon Center.

“It was a great battle between us and the Wizards tonight,” said Irving, with James standing directly to his left, after the game. “A lot of the work goes to him (James). A lot of work that we put in together, just knowing each other’s game and giving each other space to work. We have the greatest player in the game right now and on this team, you just space out and let him do his thing.”

James (12-of-22 from the field, 10 rebounds and four assists) and the recently-healthy Irving (14-of-22 from the field, five rebounds, three assists and two steals) brought their A-game against the Wizards to capture their first road win of 2016, as they went off for 34 and 32 points respectively. To begin the second half, James went on a stretch of hitting four three-pointers in a row in a span of 1:45.

“That’s what it’s about,” said James. “We both have so much confidence in one another that if we see one guy going, we let him go and then it’s your turn. It’s almost like the WWF back in the day. Tag team match.”

Shooting guard J.R. Smith was also a sharpshooter on the night, as he tallied 25 points (10-of-16 from the field and 5-of-10 from behind the arc), three steals and three boards.

For the Washington, they had six players score in double figures on the night, including all five of their starters. Shooting guard Garrett Temple led the way for the short-handed Wizards with 21 points and four rebounds, while All-Star point guard John Wall had 20 points and a game-high 12 assists.

Up next, the Cavs will remain on the road and head back Midwest to take on the Minnesota Timberwolves (12-24) on Friday night at Target Center. The contest, which is scheduled to tip off shortly after 7:00 pm CT, will be broadcast live nationally on ESPN.