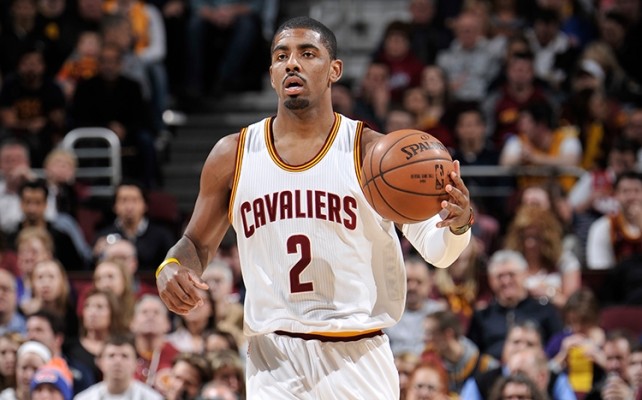 (Cleveland, OH) – Kyrie Irving took another huge step forward in his comeback with 25 points and eight assists as he helped the Cleveland Cavaliers collect their fourth consecutive win with a 122-100 victory over the Toronto Raptors on Monday night at Quicken Loans Arena.

Irving also grabbed six rebounds and was part of a starting five that all finished scoring in double figures. He and Timofey Mozgov led a 14-0 fourth quarter charge that put the game away, with the duo combining for 12 of the team’s 14 points.

Cleveland improved their record to 23-9, while Toronto drops to 21-15 on the season.

After the game, Irving downplayed the impact of his performance:

“It was just a collective effort. We wanted to make a statement,” said Irving. “To be a great team, we have to show consistency and we have to be there for each other.”

In his postgame comments, Cavs head coach David Blatt also exercised some caution with regard to Irving:

“I think we’re still ahead of the curve with Kyrie,” said Blatt. “So I don’t think it’s fair to see him do what he did tonight every night.”

Just behind Irving was J.R. Smith, who scored 24, with all of his points coming via the three-pointer. Meanwhile, LeBron James had a relatively quiet night with 20 points and seven assists, in part because he didn’t need to step back on the court in the fourth quarter.

James spoke about Smith’s ability to connect from long range, one day before the first anniversary of the deal that brought him and Iman Shumpert from the New York Knicks:

“The attention that Kevin, Kyrie and I get helps get him those open shots,” said James, who then joked, “He had more three-pointers than I had field goals.”

“If he continues to play the way he can, he can be something special,” said James. “I think he still has some room to make up until he’s really, really good.”

Asked about James’ absence in the final quarter, Blatt stated the obvious:

“The plan was to put him back,” said Blatt. “But the guys did such a good job that we didn’t need to do it.”

Cleveland used strong second-half defense to take control of the game after Toronto shot 60 percent from the field during the opening half, though the Cavs still held a slim 58-56 lead. That hot shooting by the Raptors helped negate a first quarter run that saw the Cavaliers put together a 14-2 run to take a 23-9 lead.

With the game deadlocked at 69 with 6:43 left in the third quarter, the Cavs went on a 21-9 run to close out the period. Then, after the Raptors had twice gotten the margin down to seven in the opening moments of the fourth, Cleveland put the game away with 14 unanswered points to make it 108-87 with 6:13 left.

The 122 points were aided immeasurably by 17 three-pointers by Cavalier shooters. Blatt spoke briefly about the value of that:

“We got open looks tonight and we knocked them down.”

Irving summed up the potential of the victory as far as building momentum:

“Coming out and getting a big win here was huge,” said Irving. “But we have to get ready for a big road trip.”

The Cavaliers will now travel to Washington on Wednesday night to face a Wizards team that dominated them back on December 1 in a 97-85 win, thanks to a small-ball lineup that will no doubt be used again. That will be the start of a six-game road trip that will conclude with trips to each of the three Texas teams next week.

James showed that the defeat by the Wizards still lingers with the team:

“We look forward to getting them on their home court like they got us,” said James.