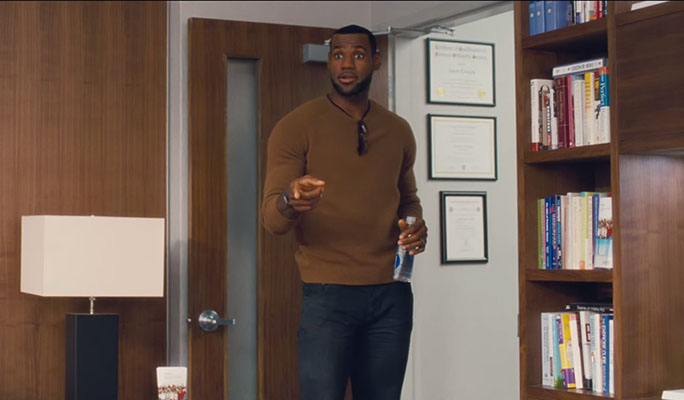 As we have known for years, LeBron James loves to be in front of the camera. The 30-year old Cleveland Cavaliers superstar will finally make his theatrical debut in Judd Apatow and Amy Schumer’s 2015 comedy Trainwreck, which will also star Bill Hader and WWE’s John Cena.

Apatow, whose movie will officially be released by Universal Pictures, unveiled the film’s first trailer on Wednesday. Schumer, known for her dark and raunchy comedy approach, falls for a sports doctor played by Hader.

Although LeBron was confirmed to make a cameo appearance in the movie, his role seems to be that of Hader’s character’s right-hand man.

LeBron, who plays himself in the movie, reveals that he has a sensitive side for PBS’ period drama series Downton Abbey.

“Listen, I’m watching it tonight. Because I’m not going to go to practice and all the guys are talking about it and I’m left out.” exclaimed LeBron about his guilty pleasure.

LeBron will take his talents to the big screen this summer on July 17th, 2015 in theaters nationwide. Hopefully by the time of the movie’s release, LeBron will have brought Cleveland a championship and achieved his third ring.