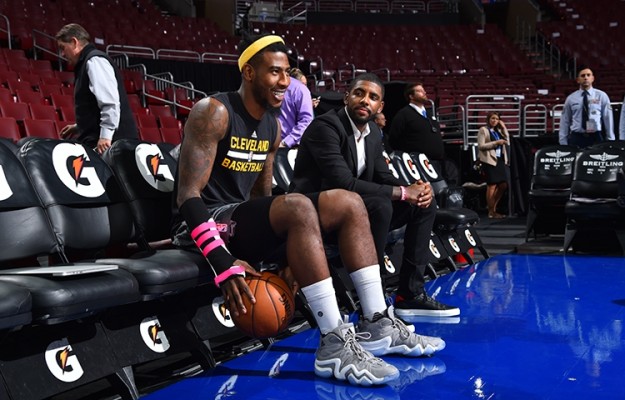 Some more positive steps toward getting guards Kyrie Irving and Iman Shumpert back on the court for the Cleveland Cavaliers happened during the team’s Monday practice when the duo took part in what was defined as a “moderated” practice.

That news from Cavs head coach David Blatt was noted in an article by Cleveland Plain Dealer beat writer Chris Haynes, and marked the first time that Irving and Shumpert had been part of a team practice. The “moderated” designation stems from the fact that neither player has been cleared to officially compete in contact drills.

Blatt explained the situation to reporters after the practice ended:

“We had a moderated practice that we were able to get them to take part in a good piece of it,” commented Blatt. “Day-to-day, making a little bit more progress.”

Irving has been rehabilitating a fractured kneecap suffered in Game 1 of the NBA Finals last June, while Shumpert was diagnosed with a right wrist injury on the first day of training camp. Both were originally deemed out until January, but Shumpert is now aiming for a December 15 return, while Irving is speculating to make his season debut within the next three weeks.

Irving has begun to pick up the pace of his activities, while Shumpert is now able to shoot with his right (shooting) hand with no restrictions.

Asked if the two would be available for Cleveland’s huge Christmas Day matchup against the currently undefeated Golden State Warriors, Blatt was non-committal:

“I really can’t say. Every day I’m watching them and they’re making progress,” remarked Blatt.  “We’re being very conscious and conscientious about keeping them within their limits and not rushing them back. But they are both working hard and well and they are making progress. Exactly when they’re going to return, I just can’t say because I don’t know. Not yet.”

The Cavaliers return to the court on Tuesday night for a home matchup against the Washington Wizards, with tipoff set for just after 7 p.m. ET.