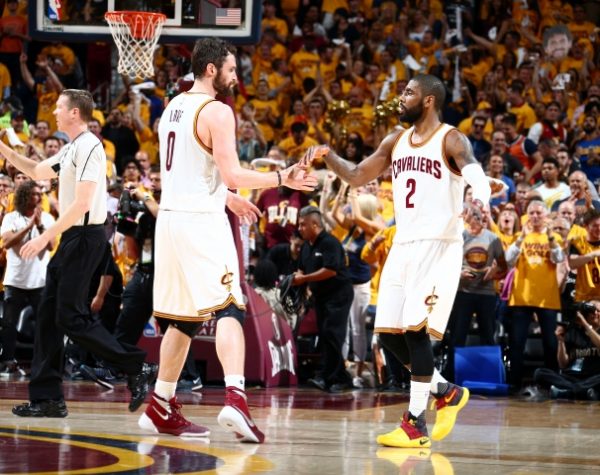 (Cleveland, OH) – Wasting no time in taking back momentum in the Eastern Conference Finals, the Cleveland Cavaliers completely dominated the Toronto Raptors during the first half en route to an easy 116-78 victory on Wednesday night at Quicken Loans Arena.

The victory, which had the Cavaliers leading by as many as 43, now gives Cleveland a 3-2 lead in the series and puts them just one win away from reaching the NBA Finals for a second consecutive year.

Kevin Love led all scorers with 25 points and combined with LeBron James and Kyrie Irving to score 71 points with none of them playing a second of the final quarter. James finished with 23 points, eight assists and six rebounds, while Irving matched him with 23 points while adding three assists and three rebounds.

“I’ve been part of some adverse situations in the past and I didn’t think that was the case tonight,” James said when asked about his calm demeanor entering the game.

Richard Jefferson was the only other Cavalier to finish in double figures with 11, while Tristan Thompson bounced back with nine points and 10 rebounds.

“Tristan’s a competitor,” Cleveland head coach Tyronn Lue said. “Tonight he was big for us defensively. We continued to move him around and it made it difficult for them.”

The Cavaliers were aggressive from the start, combining hot shooting, rebounding tenacity and suffocating defense to blow open the game in the latter stages of the first quarter. At the end of that period, the Cavs shot 68 percent and headed to intermission still hitting at a 63 percent rate. Meanwhile, they held a 23-10 advantage in rebounds and forced 11 turnovers by halftime.

“It’s a great feeling,” Irving said. “We leave this game where it stands, but it was a great game on our home floor.”

The original surge began with 11 unanswered points by the Cavaliers to take a 17-7 lead, though Toronto chopped their deficit down to four at 20-16 with 4:21 left in the period. From that point, it was all Cleveland for the rest of the half, beginning with a 17-3 run to close out the quarter.

The push continued in the second period, with the Raptors only briefly getting the margin under 20 points. In the closing moments of the quarter, any thought of Toronto getting back in the game was crushed with a 14-3 run that gave the Cavs a commanding 65-31 lead. The Raptors would chip only three points off that massive deficit by halftime.

Indicative of the drastic change from the team’s play in Toronto was Love’s first-half performance in which he scored 19 points and showed no signs of the injury he suffered on Monday night. In addition, he connected on all six of his shot attempts, including a trio of three-pointers, and finished 8-of-10 from the field.

“He knew what he had to do,” Lue said. “I just want Kevin to be aggressive.”

“Tonight was a bounceback for (Kevin) and he wanted to make a different outcome. He did that tonight and that’s the mark of a true professional.”

The Cavaliers will try and clinch the series on Friday night when the two teams head back to Toronto for a game set to tip off just after 8:30 p.m. ET.

“Mentally, I’m already in Toronto,” Irving said immediately after the game. “We just have to get ready for Game 6.”