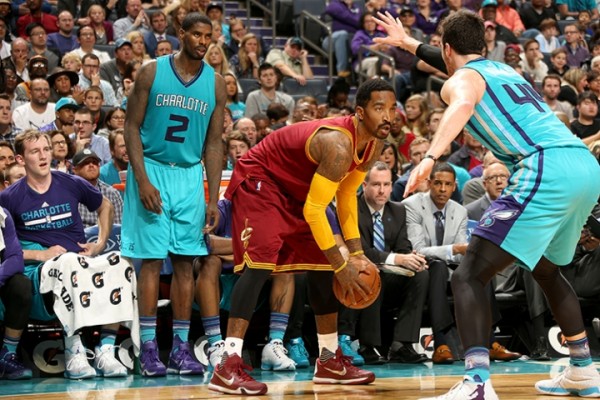 (Charlotte, NC) – Solid defense in the final 10 minutes of play and some clutch offense by J.R. Smith during the fourth quarter helped the Cleveland Cavaliers put an end to their three-game road losing streak as they knocked off the Charlotte Hornets, 95-90, at Time Warner Cable Arena on Friday night.

Charlotte led 82-75 with just over 10 minutes left, but for the remainder of the game, they made just 3-of-19 from the field as the Cavaliers roared back with a 20-8 run to improve their season mark to 12-4.

Smith’s exploits came after what had been a rough offensive night, having made just two of his first eight field goal attempts. That changed when he used a series of spinning moves to get off a jumper that gave Cleveland an 89-86 advantage. He then connected on a three over two minutes later to make it 92-88. Smith finally provided a huge cushion with 12.9 seconds left as he connected on two free throws to make it 94-90 to put away the Hornets.

However, it was once again the duo of LeBron James and Kevin Love that did most of the heavy lifting for the Cavs offense. Each finished with a double-double as James finished with a game-high 25 points and 10 rebounds to notch his seventh double-double of the year. He also boosted his personal domination over Charlotte with his 21st consecutive victory against them, a streak that dates back to his first tenure with the Cavaliers.

Meanwhile, Love had already attained his 10th double-double of the season by halftime, finishing the evening with 18 points and 16 rebounds. His numbers came in just three quarters of play, as he sat out the final period while the Cavs made their move. Despite not getting on the court, he had no problem with the decision:

“I felt I was having a good game, but anytime we can get a win, I’m glad to do it,” commented Love.

Asked how Cleveland was able to come away with the win, James cited a number of factors:

“We gave up 90 points and we were aggressive,” said James. “When you do that, you give yourself a great chance to win.”

“I thought we made the effort the whole game, but we needed to ramp things up on the other end,” said Blatt. “J.R.’s been playing important basketball for us, and he was a big key to our win tonight.”

Two key returnees to the lineup were starting center Timofey Mozgov and reserve point guard Matthew Dellavedova. Mozgov had missed the three previous games with a shoulder injury, while Dellavedova sat out Wednesday night’s loss in Toronto due to an injured calf. Mozgov finished with eight points and Dellavedova with seven.

In the first half, Charlotte moved the ball around well, dishing out 14 assists, compared to just six for the Cavs. However, by the end of the game, the Hornets held just a 20-17 advantage. On the rebounding front, Cleveland won the battle of the boards at 50-38 for the night.

James, who tallied 12 points and dished out three assists during the third quarter, was asked after the game about how he was able to get Cleveland back on track when the game was in danger of slipping away with the Cavaliers trailing 64-56:

“I understand time of possession and know what needs to be done,” commented James.

The Cavs might have knotted the score or even gone ahead had they’d been able to stop the Hornets from the outside during most of the final seven minutes of that quarter. Before missing their final field goal attempt, Charlotte had hit 6-of-8 from deep to maintain their lead.

Afterward, James was impressed with the victory:

“For us to come in here for a win was huge, because this team (Charlotte) has been playing very well at home,” said James.

Blatt spoke of the contrast between the frustration of losing on Wednesday and the victory in this game:

“I thought the guys took the other night personally and they addressed it,” remarked Blatt.

The Cavaliers will be back in action tomorrow night as they host the Brooklyn Nets in a contest set to tip off just after 7:30 p.m. ET.