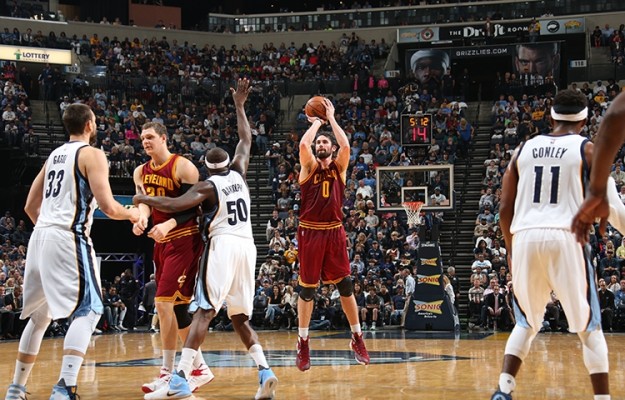 (Memphis, TN) – Quickly taking control to turn what was expected to be a tight game into a rout, the Cleveland Cavaliers notched their first victory of the 2015-16 season with a 106-76 pounding of the Memphis Grizzlies at FedExForum on Wednesday night.

The victory evens the Cavs’ record at 1-1, while Memphis starts their season out on a painful note to drop to 0-1.

Cavs head coach David Blatt was obviously pleased with the easy victory and was especially happy to see production from the bench, which contributed 50 points on the evening:

“The guys came out and had energy and purpose,” said Blatt about the win, and in reference to the bench, he stated, “They were terrific. It’s a good sign and what we were looking for during the offseason.”

Chief among the Cavaliers’ weapons, besides the outstanding defense throughout, was the three-point shooting, with the team connecting for 13 treys, led by new additions Mo Williams and Richard Jefferson with three apiece. In contrast, Memphis managed to make just two of 16 shots from beyond the three-point arc.

However, it was Kevin Love who led the scoring parade for Cleveland, finishing with a double-double on 17 points and 13 rebounds. Love’s first-half effort was a key component to getting the rout started by picking up that double-double in the first two quarters with 11 points and 11 boards.

After the game, the power forward explained how the team was able to control play for virtually the entire contest:

“We played consistent. We stuck to our game plan and played good ball for four quarters,” Love said. “We felt like we needed to be more physical and we wanted to set the tone early.”

Afterward, Blatt spoke about Love’s performance to start the year:

“I don’t know of too many players who can sit out 10 days, practice for a day-and-a-half and put up the numbers he did,” said Blatt.

James commented about Love’s role, sounding positive about his potential for the season:

“We’ll use Kevin whatever way he wants,” said James. “He’s going to have a hell of a season.”

In addition, James spoke about the potential depth the team will have this year:

“Coach (Blatt) will have some good problems to have, especially when Ky (Kyrie Irving) and Shump (Iman Shumpert) come back.”

The Grizzlies struggled to put the ball in the hoop for much of the first half, connecting on just three of 28 shots during the worst stretch. The extreme dry spell allowed the Cavs to go on a 38-9 run, taking their biggest lead of the half at 43-15, following an alley-oop to Timofey Mozgov with 6:54 to go before intermission.

The blowout allowed the Cavaliers to play James just under 31 minutes. That helps their season-long goal of giving him as much rest as possible in preparation for what they hope will be a long playoff run.

Indicative of how bad things went for the Grizzlies were two plays in each half: in the first half, a breakaway layup became nothing when the ball was lost out of bounds; in the second half, a steal turned into an offensive foul when Memphis’ Tony Allen elbowed James as he went in for a layup.

The game was reminiscent of last season’s game on March 25 in Memphis between the two teams, when the Cavs used the middle two quarters to blow the game open and coast to a 111-89 win.

The Cavaliers now head home to Quicken Loans Arena to host their home opener on Friday night against the Miami Heat. Tip-off is set for shortly after 7:00 p.m., with the game being broadcast nationally on ESPN.