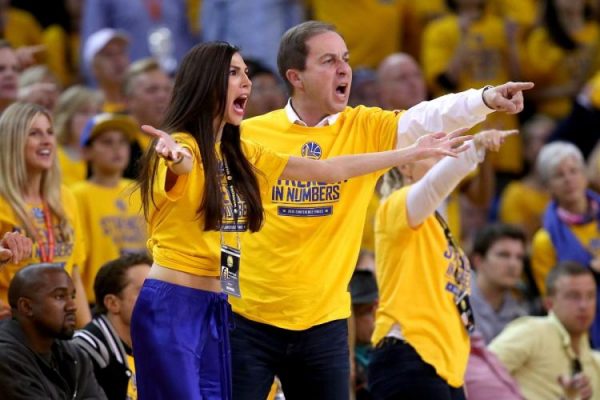 The NBA playoffs have been a story of two teams dominating their respective conferences. The defending world champion Cleveland Cavaliers have been an unstoppable force in the East, whilst in the West, the Golden State Warriors have dismantled everyone in their way so far.

With the Warriors sweeping the San Antonio Spurs on Monday night, they have advanced to their third straight NBA Finals and await the winner of the Eastern Conference Finals. The Cavaliers had a minor hiccup on Sunday night against the resilient Boston Celtics, but a third straight Finals matchup between the two teams looks to be inevitable.

The Cavs have a 2-1 series lead with a home game to come on Tuesday night at Quicken Loans Arena, and LeBron James and company will be looking to bounce back in a big way. As the race for the Eastern Conference crown fast approaches, Warriors owner Joe Lacob was asked who he’d like his team to face in the Finals.

He responded as we’d expect anyone in the Warriors organization to:

“I don’t care who we play, but my preference is Cleveland,” he said via Marc J. Spears of ESPN’s The Undefeated. “We have some unfinished business.”

There is no question the two teams have bad blood towards one another, and quotes like this add fire to the already fierce modern-day rivalry. While the Cavs have to worry about the Celtics first, the Warriors are waiting in the wings to take back what they feel is rightfully theirs. They are the first team in NBA history to sweep all the way into the Finals, but perhaps the lack of adversity and resistance could come back to bite them if they do happen to match up against a hungry James and his refocused Cavaliers.

It won’t be easy for the Warriors, as the King and his men are ready for any challenge to come their way in the hopes of defending The Land and bringing another championship back to Northeast Ohio.