LeBron Vows to Wreck Havoc Against Anyone Who Wears His Sneakers 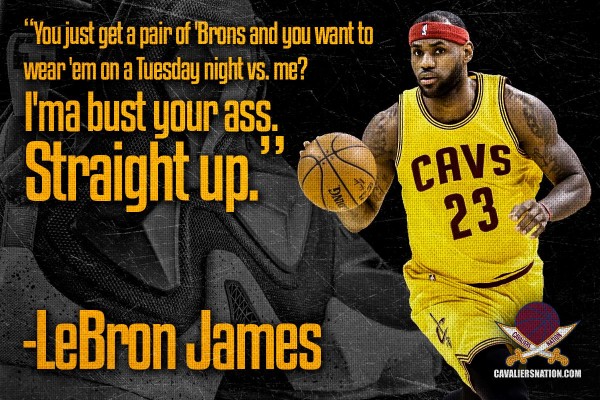 Laying down the gauntlet for any opposing player brave enough to lace up the Nike signature sneakers that he made famous, the Cleveland Cavaliers‘ LeBron James says that such a decision will come back to haunt that player.

James spoke in a GQ video for their series, “Grails,” and prefaced his main comment by noting how such a scenario parallels what he saw growing up when he watched players wear Air Jordans against Michael Jordan himself:

“I used to see guys wear MJ’s shoes when they played against MJ, and I’m like, ‘Oh MJ’s got a little mental edge over those guys,'” said James.

Indicating what he would do to that player, James was blunt:

“If you’re just a guy that’s just like, you actually just go to Foot Locker or somewhere, you just get a pair of ‘Brons and you want to wear ’em on a Tuesday night vs. me? I’m gonna bust your ass. Straight up.”

In reality, James does that to players wearing any type of sneaker. However, given his fervor on the subject, it’s readily apparent that he’ll be locked in any time a player makes such a fateful decision.

The comments in question come approximately six minutes into the seven-minute video.