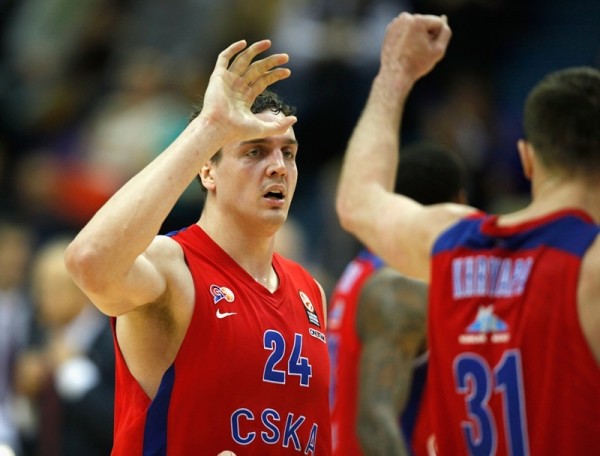 While the Cleveland Cavaliers aren’t entirely sure exactly what they’re getting with the arrival of new reserve center Sasha Kaun, they do know that the cost won’t be much this coming season. Given the other massive contracts already on the roster, that should come as a welcome relief to the Cavaliers front office.

Kaun, who the Cavs have had the rights to for the past seven years while he honed his game in his native Russia, was signed to a reported two-year deal on August 22. The Cleveland Plain Dealer’s Terry Pluto wrote that former Cavaliers general manager Danny Ferry told him last month:

“He’s like a sponge. He soaks up everything the coaches tell him. The best thing he did was go and play for CSKA Moscow. It’s the elite level in Europe.”

The pay for this year will be just $1.276 million, which is the amount of money left over from the mid-level exception money that also brought back to Cleveland veteran guard Mo Williams.

The contract will be a pay cut for Kaun, who reportedly made $2.9 million last season. However, Kaun had previously indicated that he planned to test his ability in the NBA, and the combination of his uncertain adaptability and playing for a true title contender was enough for him to accept the deal.

That uncertainty is based on Kaun having to change his style from international to the faster pace of NBA play. That’s one reason why he’s expected to be brought along slowly, teaming with veteran Anderson Varejao to back up fellow Russian big man Timofey Mozgov.

Kaun has played on the Russian national team for Cavaliers head coach David Blatt, so that will also help speed up any transition.

The amount he’ll be paid next season is uncertain, but given the huge increase in the league salary cap, it will definitely be an increase. How much depends on the final number for the cap, as well as his performance this season.