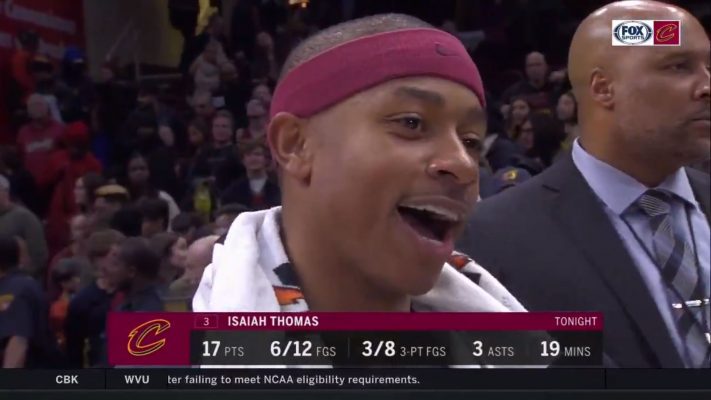 After having his livelihood taken away for the last seven months because of a severe hip injury, Cleveland Cavaliers point guard Isaiah Thomas made his long-awaited debut on Tuesday night during the Cavaliers’ 127-110 win over the Portland Trail Blazers. Despite that lengthy absence, Thomas hardly looked as if he’d missed any time, with a solid performance that lasted less than 20 minutes.

A smiling @isaiahthomas was visibly excited immediately following his @cavs debut in which he scored 17 points in 19 minutes on 6-12 shooting. #AllForOne pic.twitter.com/QJxj7sNG7g

"I didn't think I would play as well as I did."

Even @isaiahthomas was surprised with his stellar @cavs debut. pic.twitter.com/qbmGDJ5pgK

Thomas finished with 17 points, hitting half of his 12 shots from the field while also draining a trio of 3-pointers. Oddly, the 88 percent career foul shooter missed two of his four attempts from the free-throw line, though he also added three assists.

Having a competitive mindset on the court has meant that Thomas is vulnerable to occasionally getting whistled for a technical foul. He wasted little time living up to that reputation by being assessed one with 3:18 left in the first half.

The aggressive approach of Thomas has also meant that he’s taken punishment over the course of his career. The good news for the Cavaliers is that Thomas took some hits and falls in his debut and appeared to suffer no ill effects from them.

Thomas won’t be playing in Wednesday night’s road game against his old team in the Boston Celtics. That decision is a protective measure, given the rigors of playing back-to-back contests.