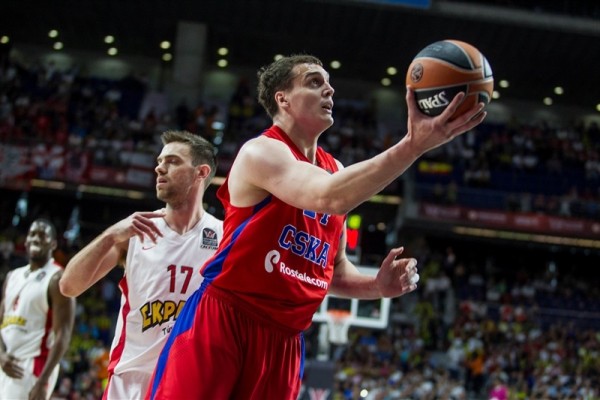 Danny Ferry was the man who acquired Sasha Kaun during the 2008 NBA Draft.

Ferry, who served as the Cleveland Cavaliers‘ general manager from 2005 until 2010, initially saw some potential in the seven-foot Russian center. Kaun was drafted with the No. 56 overall pick by the Seattle Supersonics, who selected the University of Kansas product for the Cavaliers. Cleveland bought the rights to Kaun for $300,000.

While Ferry saw potential in the 23-year-old center at the time, he admits he was a very raw prospect, via Terry Pluto of The Plain Dealer:

“He was a buy-and-hold. That’s what I was thinking about when we drafted Sasha — being patient. I knew he was raw. But I also knew he was tough, smart and driven to succeed. It would just take time. He was a very late bloomer.”

Ferry stresses that the thought process all along with Kaun was to have him play several years in Moscow to improve his game before making the jump to the NBA. The former Jayhawk did just that—in fact, he waited seven total years before agreeing to an official deal with the Cavaliers.

The former Cavaliers general manager believes the center will have a true impact for the team this upcoming season:

“He will really help the Cavs. He was a three-time Academic All-American at Kansas. He’s like a sponge. He soaks up everything the coaches tell him. The best thing he did was go and play for CSKA Moscow. It’s the elite level in Europe.”

At the age of 30, Kaun seems primed to play a key role off of the bench for a Cleveland team that figures to be the favorite to win the NBA championship next season. Ferry continued to praise his former acquisition following the announcement of Kaun’s signing:

“Sasha wants to give the NBA a shot. I also heard they want to raise their family here (in the USA). It’s good timing for him and the Cavs.

“He’s an excellent defender. He’s one of those glue players. He makes other guys better because of his rebounding and defense. I really like his game.”

The Russian center is projected to come off the bench and play alongside Anderson Varejao and Tristan Thompson for this upcoming season.