Cleveland Cavaliers: Is It Worth Re-Signing J.R. Smith? 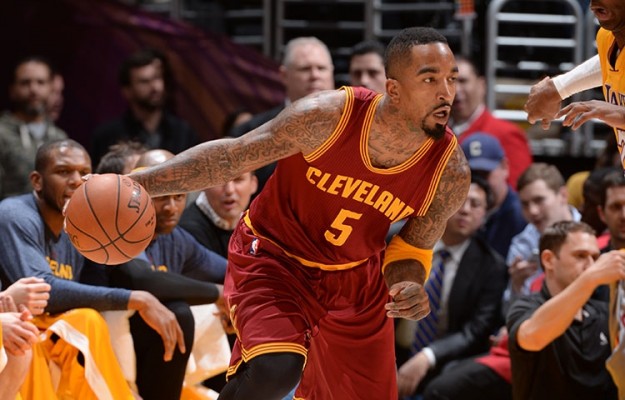 When J.R. Smith made his decision to opt out of a deal that would have paid him $6.4 million for the 2015-16 season, he had visions of a multi-year deal worth approximately $8 million or more a season.

Those visions have turned into a nightmare for the 11-year veteran, since minimal interest in the 29-year-old guard has put the Cleveland Cavaliers in the position of dictating the terms of Smith coming back. That will no doubt be at a team-friendly price that will be less than the money he was guaranteed to earn for the upcoming campaign.

Virtually the only interest that has popped up was from the woeful Philadelphia 76ers, but according to a tweet from Sam Amico, that interest has faded. That means he’s likely to be re-signing soon with the Cavs.

Which leads to the simple question of whether the team should re-sign him at all. Smith’s weak performance in the NBA Finals forced LeBron James to take on an even heavier workload than he already was doing. The end result was watching the Golden State Warriors celebrate their NBA title at Quicken Loans Arena.

Smith shot just 31 percent from the field in the Finals and a mere 29 percent from long range. The fact that those games were watched by virtually everyone in the NBA is undoubtedly the reason why Smith’s potential market evaporated quickly.

The positives for a Smith return can be seen in his ability to heat up quickly and torch the net. For example, in 10 games after his January 5 trade from the New York Knicks, Smith drilled five or more three-pointers. When the final buzzer sounded in those games, Cleveland won eight times.

In addition, Smith helped get the Eastern Conference Finals sweep of the Atlanta Hawks going with a 28-point performance that saw him connect on eight of 12 three-point attempts.

So it’s obvious that the man known as J.R. Swish is capable of lighting up the scoreboard on any given night. Just how often that happens, though, is what begins any discussion of the negatives that have to be assessed.

While Smith can rev up any offense, he’s also capable of going ice-cold at any point in time. That had an effect on the Cavaliers during the regular season: in the 34 wins, Smith shot 44 percent from the field; in the 12 losses, he managed to hit only 36 percent of his shots.

In addition, Smith’s tendency to become distracted enough from the task at hand can have consequences which can come back to bite the Cavs. The most obvious example came in the Game 4 clincher against the Boston Celtics in the first round of the NBA Playoffs.

Smith claimed that the Celtics’ Jae Crowder was continually pushing him, actions that eventually led Smith to hit Crowder in the face. That got Smith ejected from the game, but more importantly, got him suspended for the first two games of the subsequent series with the Chicago Bulls. The Cavaliers dropped the first game of that series at home before coming back to win the series in six games.

Actions like that and Smith’s reported off-the-court escapades while with the Knicks were one reason why Phil Jackson recently described his behavior with that team as “delinquent.”

To be fair, Smith was not a problem off the court after his arrival in Cleveland and genuinely enjoyed being a part of the team. The fact that Tristan Thompson and James have given him strong public support gives fans a pretty good idea of what the end result will be in this case.

Plus, anyone truly worth signing has already inked a new deal with his team. Given that fact and remembering the bench issues that plagued the Cavaliers during the postseason, signing Smith to a deal in the general range of that $6.4 million figure seems to be the best way to go for the Cavs.

While Cleveland pretty much holds the cards in this matter, making an example of Smith by taking a cleaver to his salary probably isn’t the best message to send. So, by signing him to a one-year deal, they can get Smith to produce at his maximum level, and if he doesn’t, he can go elsewhere for the 2016-17 season.

The Cavaliers know what they’re getting in Smith, and having a potential weapon in their hands is better than being unarmed when they need it most.