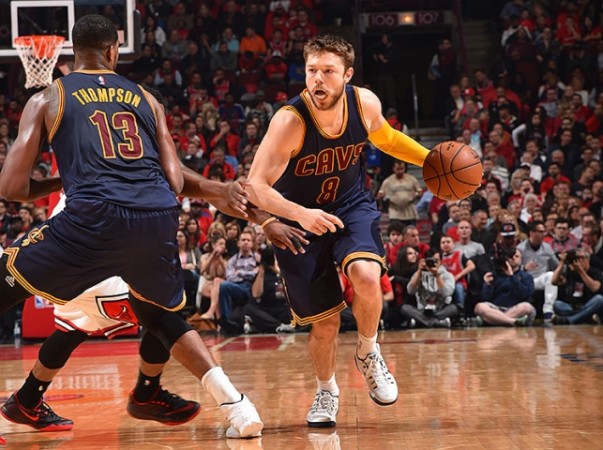 (Chicago, IL) – Holding the Chicago Bulls to 42 points over the last three quarters helped the Cleveland Cavaliers clinch Game 6 of the Eastern Conference semifinals with a 94-71 victory over the Bulls at the United Center on Thursday night.

The Cavaliers now advance to the Eastern Conference finals, where they’ll face either the Atlanta Hawks or Washington Wizards.

Ironically, the first quarter gave the impression that the contest would be a high-scoring affair when the Cavs held a 33-31 lead after one period. However, from that point, the Bulls couldn’t buy a basket for long stretches at a time, and were held to just 29 percent shooting from the field in the second half.

The unlikely leader of the Cleveland offense was backup point guard Matthew Dellavedova, who tallied 19 points after Kyrie Irving left the game during the second quarter, reinjuring his knee after inadvertently stepping on teammate Tristan Thompson‘s foot.

Dellavedova’s scoring outburst helped stem any problems resulting from Irving’s absence. Seven of those points came early in the fourth quarter to break the back of Chicago by giving the Cavs an 82-62 lead.

Afterward, Dellavedova spoke about how he was able to fuel the offense, saying, “I’m confident in my ability. I put in the effort, so you just have to trust that it will eventually pay off.”

Irving was full of praise for Dellavedova, saying, “He’s just an incredible competitor. I just can’t say enough about his effort.”

LeBron James also chimed in by saying, “He’s tough as nails and doesn’t make a mistake.”

Despite a poor shooting night, James was still able to accomplish a near triple-double with 14 points, 10 assists and nine rebounds. With Cleveland leading by more than 20 midway through the quarter, James was removed from the game, missing the opportunity for one more rebound. Thompson also shined on the evening with another double-double with 13 points and 17 rebounds.

James spoke about how he tweaked his back during the course of the game, saying that there was no thought of going out. “When you’re the leader of the group, you can’t show any weakness,” said James.

The game began with the Bulls controlling the pace by scoring the first four points before then jumping out to a 12-6 advantage.

The Cavaliers then charged back with seven unanswered points to take the lead for the first time. That lead would change hands five times in less than two minutes before Chicago put together a 7-1 run to take a 25-18 lead.

Thompson collected 10 points and four rebounds in the opening 12 minutes, while veteran James Jones also added a pair of threes to help the Cavs take a two-point lead after one quarter.

Cavaliers head coach David Blatt also took the time to offer high praise for Dellavedova, saying, “The kid embodies all the good things you want to see in players and athletes.” He later added, “Matty can play, and he understands his role. He has no fear, that kid’s a competitor.”

Early in that run, a Bulls player was whistled for a flagrant foul for the second game in a row. With 5:19 to go before intermission, Iman Shumpert was clotheslined by Chicago’s Nikola Mirotic as Shumpert drove to the basket. In this instance, Mirotic was not ejected as Shumpert was able to convert one of the two free throws.

Shumpert then added a three before Derrick Rose’s basket made it 47-42 with 3:43 to go before halftime. At that point, the Cavs forged ahead to score 11 straight points before the Bulls reduced the intermission margin to 14 at 58-44 on a basket with just under six seconds left.

Blatt spoke about Shumpert, a native of the Chicago area, being able to respond in such fashion by saying, “I think the wrong guy to clothesline in his hometown is Iman Shumpert.”

One of the keys to the first half was Cleveland’s prowess from long range, connecting on eight of 14 three-point shots. In contrast, Chicago made just one of their nine attempts.

Offense then was at a premium as both teams severely struggled once the game resumed, connecting on just one of 19 field goal attempts over much of the opening six minutes. That basket came from the Bulls with just over nine minutes left to make it 58-46, while the Cavaliers didn’t score until Dellavedova’s basket with 6:13 left in the third.

The Cavs would take a commanding 19-point lead at 67-48 after James hit back-to-back shots from the left side that briefly stopped the rough night shooting. Prior to those two baskets, James had hit just three of his 15 shots.

Chicago would twice get their deficit down to 13, but J.R. Smith’s pair of three-pointers prevented the game from getting any closer as the quarter ended with Cleveland leading 73-60.

Dellavedova then did his damage and the Cavaliers coasted for the final nine minutes to advance to the Eastern Conference finals for the first time since 2009, and for only the fifth time in the 45-year history of the franchise.

Asked in the postgame press conference about whether Irving could have re-entered the game, Blatt said, “I wasn’t going to play him because he stiffened up, and the way things were going, I didn’t consider it.”

Blatt talked about how the team has fought to get to this point, saying, “I know where we started and I know the goals that we set, but we haven’t finished the job yet.”

Bulls’ head coach Tom Thibodeau praised the Cavaliers, saying, “Give them credit, LeBron was great and Thompson was a monster on the boards.”