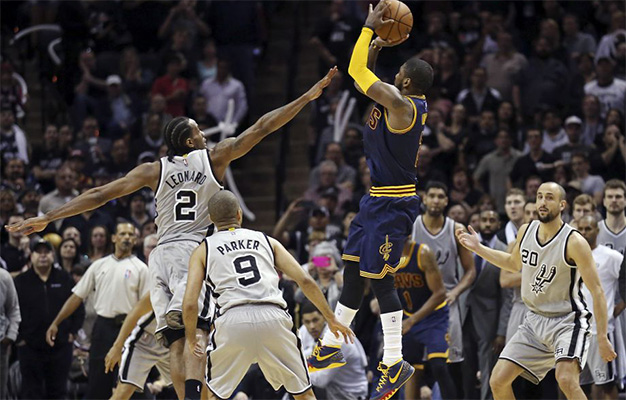 Following a very memorable 2014-15 campaign for the Cleveland Cavaliers that came up just short in the NBA Finals, it’s quite evident that Cavaliers Nation is still hurting from coming so close to a championship. Despite an undesirable end to the season, the 2014-15 journey was full of excitement and highlights for the Cavs.

Trying to simply come up with a list of the top 10 plays of the Cavs’ season was quite the challenge, considering how many amazing plays Cleveland made to get as far as they did. However, everyone’s entitled to their opinion as the seeding can be interchangeable, but here’s the list we compiled here at Cavaliers Nation.

What better way to start a top 10 countdown than with a LeBron James dagger? “The King” drilled a three pointer over small forward Jared Dudley with 14.1 seconds left to preserve a 104-99 win over the Milwaukee Bucks on April 8th. The victory was crucial, as the Cavs improved to 51-27 on the season and secured the Central Division title that night.

The best part about this clip is how all the Bucks’ announcers can do is laugh it off and tip their hat to James in respect. The King’s message to Bucks fans: “Get out of here, it’s time for you to go home.”

Next: Kyrie Irving’s Layup High off the Glass vs. Knicks