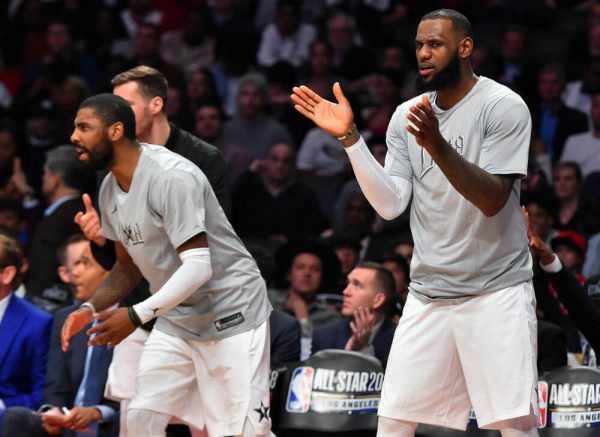 For the first time in almost a year, LeBron James and Kyrie Irving took the court once again as teammates. Irving didn’t play for his old team, but the 2018 NBA All-Star Game provided the two players with the stage to remind everyone what life was like for the Cleveland Cavaliers for three years.

It was also an opportunity for James and Irving to reminisce about their relationship on the court especially when certain plays seemed oddly familiar.

James tied the game at 144-all after he made a step-back three in the face of 7-foot center Joel Embiid, and 1:30 left in the game. Then, he delivered the knockout punch that finally pummeled Team Stephen to submission when he made the go-ahead layup from a slick pass by Irving. That shot gave Team LeBron the lead for good, 146-145.

Irving thought the play was reminiscent of their playing days together in Cleveland.

“I played with him a few times. I cut back door, Russ[ell Westbrook] was driving, I saw the opportunity,” Irving said. “I saw, before Russ even passed to me, LeBron was going to circle to the rim and [is] one of the best finishers at the rim. So it was kind of an easy drop-off to give us that lead. We’ve done it plenty of times before, so nothing new.”

After the game, James spoke about what it was like playing with his former running mate once again.

“It was phenomenal. It was phenomenal. Anytime you’re able to get back and play with one of your old teammates, and as great as he is, we all know that,” James said. “The flashiness, the ballhandling, the ability to shoot, it was just great to get back on the floor with him. It was a great moment, for sure.”

In the first half, the two were seen laughing hysterically while they were on the bench, signifying a closure to the overly hyped James-Irving feud.

Team LeBron defeated Team Stephen 148-145 in the first of what could be a new ongoing format for upcoming All-Star Games. As expected, the former teammates were there at the end, making plays for one another and finishing the game off with a victory.