Cavs Rumors: Cavaliers Veterans Reportedly Upset with David Blatt’s Use of the Bench 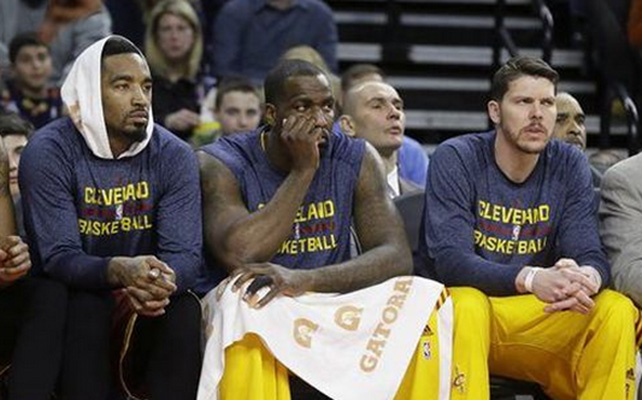 When you’re winning, everyone is happy. When you lose, well that creates an unhappy locker room.

Just a day after the Cleveland Cavaliers dropped Game 4 by a score of 103-82 to the Golden State Warriors, Brian Windhorst of ESPN.com has leaked that some veterans are unhappy about their lack of playing time throughout this NBA Finals series.

Joe Harris and Kendrick Perkins saw their first action of the series in Game 4 with three minutes apiece. However, that was in garbage time when the Cavs were already facing defeat. Veteran Shawn Marion, who has announced his intention to retire following the season, has yet to see any action so far in the Finals. Mike Miller continues to see just sporadic playing time.

For most of this series, head coach David Blatt has relied on only a seven-man rotation despite season-ending injuries to Kyrie Irving and Kevin Love this postseason. The Cavs have relied heavily on LeBron James who has seen playing time in at least 41 minutes in all four games of this series. Despite being blown out, all four of the other starters saw at least 33 minutes of action.

To say the least, the Cavaliers rely heavily upon their starters on a team that’s already decimated by injuries. The team is clearly being affected by fatigue, as Matthew Dellavedova checked into a hospital for dehydration following Game 3’s victory on Tuesday night.

Windhorst stated the following in regards to the Cavaliers’ rotation during the championship series:

“Blatt played only seven players in Game 4 before clearing the bench in the fourth quarter when the game turned into a blowout. He played eight in the first three games with Mike Miller getting a few minutes in Games 2 and 3. With several players, James and Dellavedova especially, looking worn down from the demands in the playoffs, players have begun to privately grumble that Blatt needs to use his whole roster.”

With the series now tied two apiece, perhaps it would not hurt for Blatt to give playoff-tested veterans such as Perkins, Miller and Marion a chance to help out a very fatigued squad at the moment.