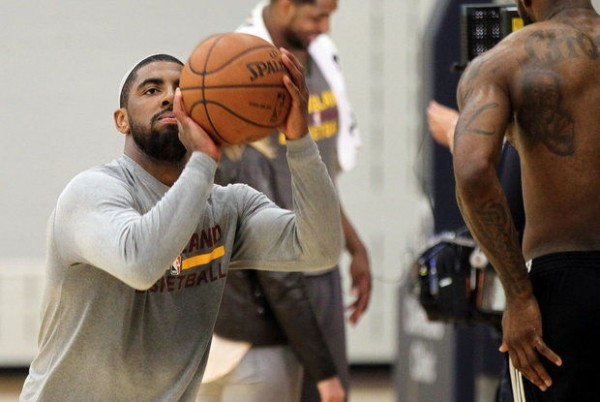 With the first game of the Eastern Conference finals against the Atlanta Hawks set to begin on Wednesday evening, the Cleveland Cavaliers received a welcome bit of news from starting point guard Kyrie Irving.

Irving took part in a full team practice on Monday, and told assembled media, “I’m going to go. The last few days of treatment, rest and a combination of a lot of things I feel pretty good going into Wednesday’s game.”

The status of Irving had been questionable after he sustained a second quarter injury in the team’s clinching victory over the Chicago Bulls last Thursday night. The fourth-year guard out of Duke had already been dealing with a strained right foot and tendinitis in the left knee when the injury took place after he inadvertently stepped on teammate Tristan Thompson‘s foot.

On Saturday, Irving’s status had been considered a game-time decision, but his emphatic comments seem to dispel that notion.

Aiding in the recovery process is the fact that the team has been idle since the clinching victory, with Irving not having practiced until Monday. The team is already without power forward Kevin Love for the remainder of the playoffs, while LeBron James and Thompson have also been dealing with some injuries along the way.

Irving later added about how much better he feels by saying, “Just being able to feel both of my feet underneath me, especially as I’m shooting. It feels amazing. Just the confidence of getting extra work in and preparing with my teammates. I think that’s the biggest thing I get out of it, you don’t want to be on the sideline at all, especially when you’re preparing for such a big stage like this. I want to be as close to 100 percent as I can be before Wednesday. Just keep doing the necessary things to do that.”

The conference finals get underway with an 8:30 p.m. E/T tipoff on Wednesday night in Atlanta, followed by a Friday night game at the same time. The scene then shifts to Quicken Loans Arena for games on Sunday night and on Tuesday, May 26. Both of those clashes will also tipoff at 8:30 p.m. ET.