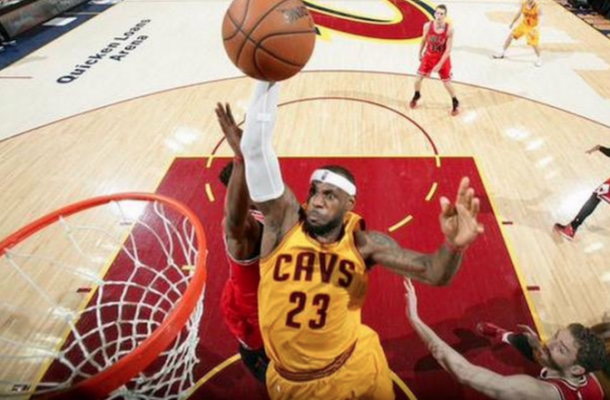 (Cleveland, OH) — In the return of his trademark headband, LeBron James had himself a stellar night in the Cleveland Cavaliers‘ 106-91 beatdown of the Chicago Bulls on Wednesday night at Quicken Loans Arena.

James, who struggled during the 99-92 loss in Game 1 on Monday night, was on another level in Game 2 with a magnificent performance to lead all scorers with 33 points (13 of 29 from the field and seven of nine from the charity stripe) to go along with eight rebounds, five assists and two steals.

The Cavs threw an all-out blitz at the Bulls in the first quarter, as Cleveland overwhelmed Chicago by a score of 38-18 after 12 minutes of action. James and Kyrie Irving (21 points and three assists) led the charge for the Cavs, as the 11-time NBA All-Star forward tallied 14 of his 33 points in the first quarter.

“We’re very shorthanded right now, a little banged up. “said James after the game. “I have to be aggressive, even more aggressive than my usual self. I was happy I was able to make a couple of plays to help our team win tonight.”

For the second straight game, the Cavs were without the services of Kevin Love (shoulder surgery) and J.R. Smith (two-game suspension). Their absence didn’t slow Cleveland down out of the gate whatsoever, as Chicago trailed 64-45 at halftime and faced a double-digit deficit the entire game.

Iman Shumpert, who had 20 points as a starter in Game 1, followed through with another strong performance en route to 15 points (four three-pointers made), seven boards and three steals. James Jones came off the bench to drill five three pointers (17 points), while Tristan Thompson started in Love’s place to nab 12 clutch rebounds (six were offensive boards).

“As a team, we came out with a defensive mindset and the offense was very aggressive to help us get this win,” said James. “It’s going to be tough in that building (United Center). I’ve played in that building multiple times and I know how tough it is to win there, as the crowd is unbelievable. For us, we have to play the same way we did tonight.”

Another pleasant surprise for the Cavs was Matthew Dellavedova, who stepped up off the bench with nine points and nine assists in 36 minutes of action.

For the Bulls, 2011 NBA MVP point guard Derrick Rose put up solid numbers with 14 points, 10 assists and seven rebounds. However, he struggled with his shot all night, was only able to make six of his 20 shots from the field and didn’t shoot a single free throw for the second game in a row.

“It’s frustrating,” said Rose after his team’s Game 2 loss. “The way we came out was like a nonchalant type of attitude. The intensity wasn’t there.”

All-Star shooting guard Jimmy Butler led the way in scoring for Chicago with 18 points (five of 14 from the floor), while power forwards Paul Gasol and Taj Gibson both scored 11 points.

Up next, the series shifts to the Windy City for Game 3 on Friday night at United Center. The contest, which is scheduled to tip off shortly after 8:00 pm ET, will be broadcast nationally on ESPN.