Timofey Mozgov Ready for a Physical Series Against the Chicago Bulls 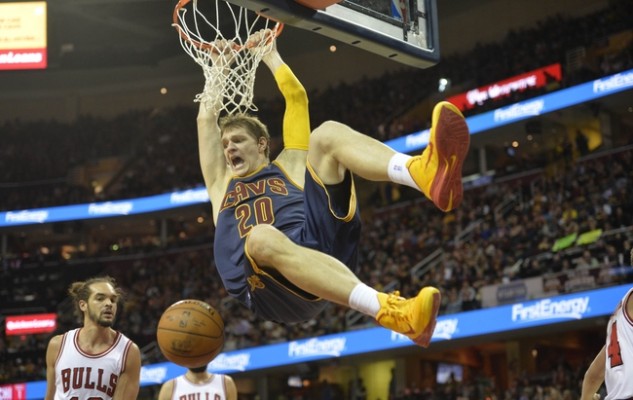 One of the key personnel for the Cleveland Cavaliers in their series against the Chicago Bulls will undoubtedly be center Timofey Mozgov, since he’ll not only be battling the Bulls’ Pau Gasol in the paint, but will also have to fend off players like Joakim Noah for rebounds.

Mozgov’s presence in the Cavaliers’ lineup since the January 7 trade from Denver has been integral to the team’s success. Perhaps the best indicator is seen in the team’s home record since Mozgov’s arrival: 23-1, with the lone loss coming after the squad had clinched the second seed for the postseason.

James spoke about Mozgov’s ability to quickly establish himself within the fluid team chemistry that James was attempting to create. Considering Mozgov arrived at a time when the season was seemingly slipping away from Cleveland, the effort is all the more remarkable

“He’s been welcome from day 1. His demeanor, his approach to the game, his work ethic. He works every day. He continues to get better. We’re grateful to have him,” said James, who also praised Mozgov as “one of the best end-to-end bigs we have in our game as far as the pace and speed that he plays.”

Of special value to the Cavaliers, according to James, was Mozgov’s ability to switch out on guards as well as a knack for contesting shots.

Blatt sought to make sure that Mozgov, who he’s known since the seven-footer was a teenager, was not the only Cavalier player expected to pick up his game due to the season-ending injury of Kevin Love and two-game suspension of J.R. Smith.

“I think to put it on one guy or two guys would be a mistake. One thing we have to do collectively as a unit is we have to step up, because we are missing some guys,” said Blatt.  “We’ve been preparing for that, but everybody is going to have to give more. Every single guy.”

Mozgov himself fully expects the series with the Bulls to be a bruising battle, but he welcomes the challenge. “Chicago is a physical team, and it’s the second round of the playoffs. I think it’s going to be real physical,” said Mozgov.

Alluding to the controversial play in the Game Four victory over the Boston Celtics that ended Love’s season, Mozgov then explained the contrast between what happened and what’s set to take place.

“For me, it’s different between physical and dirty,” Mozgov said.

During the sweep of the Celtics, Mozgov was a virtual swatting machine, slapping away 12 shots during the four wins. However, he knows that maintaining his concentration is a key to success against a much better team.

One of the ways the Bulls figure to challenge Mozgov is to try and bring the game to him in order to get him into foul trouble. Whether or not that works may be the ultimate litmus test as to how the overall series goes.

Mozgov played in three of the Cavs’ four games against the Bulls during the regular season, with the Cavaliers winning twice. The victories both came in Cleveland, while the loss came in the Windy City in a game right before the All-Star break that Love missed due to injury.

In the three contests against Chicago, Mozgov hit on 17 of 27 from the field and averaged over 11 rebounds per game. Given the scoring punch missing due to the absences of Love and Smith, feeding the ball inside to Mozgov may be more of an option for Blatt, considering the shooting success he has enjoyed.

However it plays out, there’s no denying the impact that Mozgov has had on the team, a fact that TNT’s Charles Barkley pointed out. “Mozgov is the guy that turned around their season. They were too small with Love and Varejao down low,” said Sir Charles.

With the challenge underway, the Cavaliers are glad to know that they still have the players to get the job done.