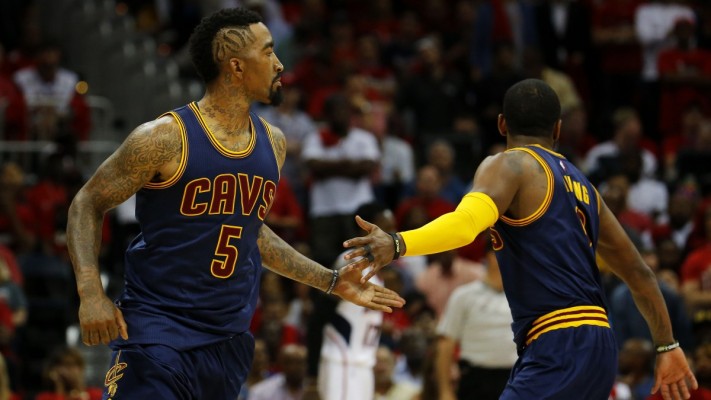 It’s hard to mention one without the other, particularly after the Cleveland Cavaliers got a combined 66 points from the two of them Wednesday night in a 121-115 victory at Washington, which extended their winning streak to five games.

But the contributions of J.R. Smith in the wake of Irving’s return following surgery to repair a fractured left kneecap should not go overlooked. The streaky three-point shooter has been at his streaky best, going a combined 13-of-23 from that distance this week in wins over the Wizards and the Toronto Raptors, which represented the Cavs’ two highest-scoring games all season.

Heading into Wednesday night, the new starting five of James, Irving, Smith, Kevin Love and Tristan Thompson had generated 127 points in 52 minutes of combined playing time, outscoring opponents by 30 total points (and by 24.2 points per 100 possessions) in that span. Smith, who just marked his one-year anniversary of being acquired by the Cavs, came within a point of tying his season high as he finished with 25 points against the Wizards, including five three-pointers on 10 attempts.

“It’s real fun making shots, especially with what this game meant to us individually and as a team,” Smith said after the Cavs gained a measure of revenge on the only team to defeat them at home all season.

His back-to-back games of more than 20 points are noteworthy in that Smith topped that figure just once before Irving’s return on Dec. 20. Even so, he largely stepped back and marveled at the 19-point fourth quarter Irving registered as the Cavs put away the Wizards to open a six-game road trip.

“That was nuts,” Smith said. “He’s probably the best one-on-one player in our game. To do what he’s done after nine, 10 months (out), to get back and still be able to come out there and shake and bake like he’s doing, it’s remarkable.”

How critical has the presence of Irving been to Smith’s success?

In the series opener to the Eastern Conference finals last spring against the Atlanta Hawks, Smith drilled eight three-pointers while Irving was available. When Irving sat out Games 2 and 3, Smith was only 4-of-12 from long range. And following the injury suffered by the All-Star point guard in Game 1 of the NBA Finals at Golden State, Smith went a combined 8-of-32 over the next four contests as the Warriors seized control of the series.

Despite having Irving in the lineup Saturday night against the Orlando Magic, Smith was the only starter who failed to score in double figures in the 104-79 romp. He more than made up for that Monday night against the Raptors by scoring all 24 of his points on three-pointers.

“When the first one goes in I feel like I’ll make the next three or four,” Smith said following his 8-of-14 shooting performance. “One of those things where it kept running hotter and my teammates just kept finding me.”

The Cavs ended up resorting largely to isolation plays involving either James or Irving to defeat the Wizards. The team had an uncharacteristic 16 assists on 48 field goals made, with no player handing out more than four.

But James was cognizant of the hand the veteran guard and 37.2-percent career three-point shooter had in helping the Cavs improve their record to 24-9 heading into Friday night’s game at Minnesota.

“J.R. was still able to get his, and everyone else was in a good rhythm,” he said. “It’s part of our game and we know that, and we don’t want to rely on (isolation plays), but tonight called for that.”

Irving intends to be available for every game heading forward, even when the Cavs end their trip next week with back-to-back contests at San Antonio and Houston. With his ability to penetrate the lane, that means Smith should figure more prominently in opponents’ scouting reports.

He relishes the chance to continue to make teams pay from long distance.

“That’s good,” he said with a laugh after the win over the Wizards. “That means I get some more catch-and-shoots.”

cleveland cavaliersfeaturedJ.R. Smithkyrie irvinglebron jamesnews ticker
← Previous Story A Comparison of LeBron James, Kobe Bryant, and Michael Jordan at the Age of 31
Next Story → 10 Players the Cleveland Cavaliers Could Trade for by the Trade Deadline