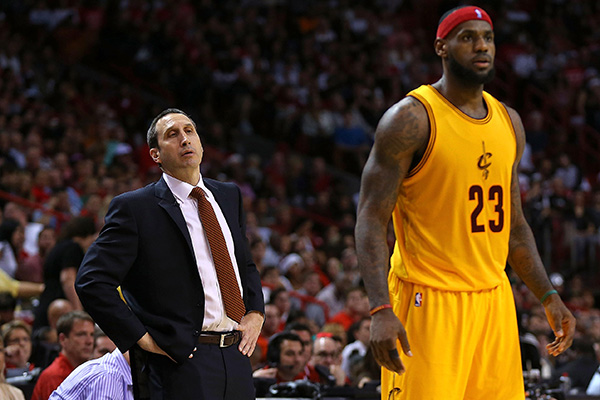 As a tumultuous first season in charge of the Cleveland Cavaliers continues, Head Coach David Blatt took some time to look back at all the events that have taken place, specifically how his relationship with LeBron James has evolved.

Blatt spoke with The Plain Dealer on Friday and noted how the team likely wouldn’t have selected Andrew Wiggins had they known that James would’ve returned to the team two weeks later.

However, even before James signed, they had to convince Kyrie Irving to sign an extension worth $90 million. Even with that amount of money offered, there was no guarantee that Irving, who had been unhappy last season, would sign.

“Kyrie had not been happy here, it wasn’t a good situation. There were times when he wasn’t happy even walking in the building—now look at him,” said Blatt.

Adding, “The thing that impressed me the most is him being a committed defender,” Blatt said, “He’s been phenomenal.” The coach also indicated that Irving’s continued presence was a key to convincing James to come back.

Of course, once James came back, the process of connecting with the superstar became paramount to achieving success.

When the team was able to add Kevin Love the following month (at the cost of Wiggins and 2014 top pick Anthony Bennett), the pressure ratcheted up for all involved.

“I expected the start of the season to be choppy at best—and rough at worst,” said Blatt.

That was due to the need to quickly establish chemistry with a new coach and three players who had only played together in non-NBA surroundings.

Struggles right off the bat immediately tested the Blatt-James relationship, with national media focusing on what they assumed would be an implosion of a budding super team. That furor faded somewhat as the Cavaliers bounced back for an 18-10 mark right before Christmas.

However, on December 23, Anderson Varejao was lost for the season with a torn Achilles. Within a 10-day span, James was sidelined for two weeks, while Irving and Love had back issues that put the team in a disastrous tailspin.

James’ absence was the most damaging, with the team losing all but one of the games he sat out. By the time he returned on January 13, the team was on the ropes with a 19-20 record.

At the depths of these struggles, Blatt had to deal with criticism about being a rookie coach, even after having coached for the past three decades at the international level.

That irritated Blatt, but what outraged him was the media rumblings that assistant Tyronn Lue was not only undercutting him, but also working to take his job.

“That ticked me off the most. I don’t care what they think of me—that stuff put Tyronn in a bad light,” said Blatt. “He has been the most loyal, most knowledgeable, most helpful guy.”

However, James’ return, the January 5 trade for J.R. Smith and Iman Shumpert, and the deal two days later for center Timofey Mozgov jumpstarted the team. Blatt’s familiarity with Mozgov from their time together on the Russian national team helped smooth the latter’s abrupt transition.

Dealing with the big man required Blatt’s special touch. Blatt said, “You don’t yell at Timofey, He responds to clear directives. When he gets upset, just let him calm down. You don’t need to beat him down. Timofey needs to be loved. He’s such a hard worker.”

Over the next three months, the Cavs went 34-9 to win the Central Division title, with one of the keys coming when Blatt and Lue changed the team’s defense on high pick-and-roll plays.

However, before making the change, they sought James’ input on the proposal. Blatt said, “If we had felt a lot of push-back, we probably wouldn’t have done it. But it was just the opposite.”

That’s because Blatt is effusive in his praise for James’ basketball intellect, saying, “LeBron is a savant in this game. His basketball IQ is the highest I’ve ever seen. I’ve made a point to solicit his opinion.” Blatt then added, “What he has to say is invaluable. He’s seen so much (in the NBA), and he knows what he’s talking about.”

Of course, that led to charges that James was actually coaching the team and that Blatt was merely a figurehead with no real authority.

In reality, Blatt terms it a partnership, saying, “He’s very involved in the process and he should be. Our relationship is very respectful. We are very demanding of each other, both wanting to achieve the same goal.”

“LeBron and I are both about the same thing — bringing a title to Cleveland,” said Blatt. “We both recognize that it may or may not happen as people would like to see it happen — because there is a process.”

That process gets back underway on Monday night at Quicken Loans Arena when Cleveland faces the Chicago Bulls in a 7 p.m. ET matchup. However, it’s been made more difficult due to the season-ending injury to Love and the two-game suspension assessed to Smith.

Blatt’s coaching abilities will continue to be critiqued until the season’s final whistle, which the Cavaliers hope occurs approximately six weeks from now.