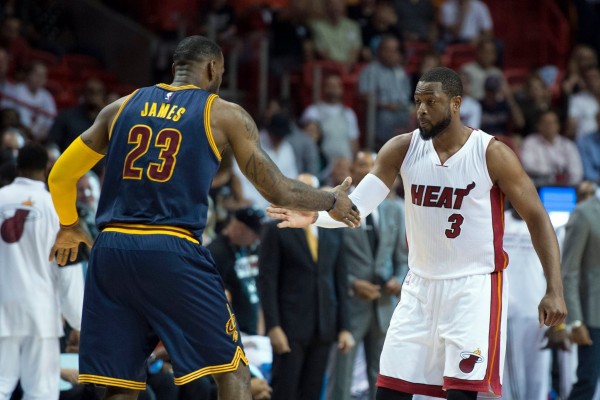 Getting their first official taste of playing at home for the 2015-16 season, the Cleveland Cavaliers host the Miami Heat in an atmosphere that’s much more low-key than last season’s matchup that saw LeBron James facing his old team for the first time.

The Cavaliers are coming off a strong Wednesday night performance against a flat Memphis Grizzlies’ squad, who played in their home opener. The Cavs took control of that game almost from the outset, led by Kevin Love’s double-double of 17 points and 13 rebounds to coast to a 106-76 victory.

That same night, the Heat began their year with a 104-94 home win against the Charlotte Hornets. The trio of Chris Bosh (21), Dwyane Wade (20) and newcomer Gerald Green (19) combined for 60 points. Bosh’s 10 rebounds gave him a double-double for the night, while Green connected on five triples.

Bosh’s output was especially welcoming to Miami, which was without the power forward for the last two months of last season after potentially life-threatening blood clots were discovered in his lung.

James spoke to the media following Friday’s shootaround about the different attitude that the Cavs have compared to the buildup of last year’s opening game at home:

“Time definitely changes a lot of things. For us, last year, we were a team that was uncertain about one another. We didn’t know, we were excited to play basketball, but we had no idea what we were doing together as a unit. This year, even though we’re not at full strength, we have a sense of who we are.”

Following Wednesday’s rout, Cleveland head coach David Blatt was especially pleased that his team’s bench combined to score 50 of those 106 points. Three players in that group: newcomers Richard Jefferson (14) and Jared Cunningham (12), as well as Matthew Dellavedova (12), combined for more than three quarters of that amount.

They’ll need to either duplicate or match that effort against the Heat, which also showed itself to have a strong bench, one that fueled the team’s second quarter surge on Wednesday.

The Cavaliers have also shown good ball movement in the first two games, which surprised James:

“It’s been a little bit surprising to see. We had no opportunity throughout the preseason, throughout practice to have our full team that’s been playing now,” said James. “Our first full practice was (last) Sunday, so it’s very surprising to see the high number of assists and low turnovers we had the first two games.”

In their four meetings last year, the two teams thrived on home cooking, with each team winning both of their home contests. In the latter two meetings, the Heat were without the services of Bosh, but still managed to split the matchups.

“It’s always special to go against your old teammates, but the game itself is another game for us to get better,” James said.

One of the key matchups to watch will be Love vs. Bosh at power forward. Both have the ability to hit from three-point land and both are returning after having had their seasons end abruptly.

James stated after the Memphis win that Love would be the focal point of the team’s offense, so the latter’s battle against Bosh should offer a good gauge of just how effective he can be for the upcoming year.

Another matchup to watch, even though it won’t necessarily be flowing throughout the game will be J.R. Smith vs. Gerald Green. Both are highly-charged personalities at the shooting guard slot who possess the ability to torch the nets, though Smith will be starting due to Iman Shumpert’s injury.

Smith will actually start off matched up against Dwyane Wade, which presents its own problems. The veteran is always dangerous, so to combat that one-two punch that Miami offers, reserves Dellavedova and James Jones need to be on their game.

Veteran Mo Williams will have his hands full against Goran Dragic, who came over to the Heat at midseason last year.

In the paint, both the Cavs’ Timofey Mozgov and Miami’s Hassan Whiteside were battling health issues during training camp, so it’ll be interesting to see which player gains an edge tonight.

James himself will be pitted against former Cavalier Luol Deng, with the 13-year veteran looking to have his first big game of the year after battling back woes in the latter part of training camp.

Looking ahead, the Cavaliers will be off until Monday night, when they travel to Philadelphia to take on the 76ers in a 7:00 p.m. ET contest.