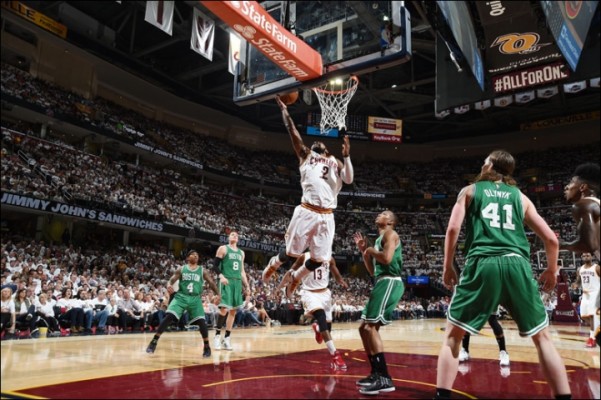 The Cavs helped to alleviate some of the concerns about their untested roster with strong performances from playoff newbies Kyrie Irving (30 points), Kevin Love (19 points and 12 rebounds), and Tristan Thompson (12 points and four offensive rebounds).

“Everyone was worried about what Kevin and Kyrie were going to do in their first playoff games,” Coach David Blatt said after the win. “Well Ky had 30 and Kevin had 19 and 12, and Tristan of course played a great all-around game, so I guess that was the answer.”

Irving especially had a strong playoff premiere, shooting 11-21 from the field, and 5-9 from deep.

When asked about his first playoff performance, Irving was happy with his play but wouldn’t get ahead of himself.

“It exceeded expectations,” Irving told Lisa Salters after the win. “(I) just went out there and competed with my brothers. It’s what you work hard in the summer for. We came in and got Game One, so we got three more to go.”

The game started as a back and forth affair, with the Cavs coming out looking a bit tight, and off on their defensive game, allowing Boston to shoot 57% from the floor while shooting only 39% themselves through the first quarter.

The Cavs struggled to contain the duo of Isaiah Thomas and Kelly Olynyk, who combined for 16 first quarter points to give the Celtics a 31-27 advantage heading into the second.

The second quarter began and the Cavs rebounded from their poor start with renewed energy and focus on both ends of the court.

“I thought we made a couple of corrections after the first quarter because we had to,” Blatt said regarding the Cavs second quarter improvement. “For the most part we just locked in a lot better, and didn’t give them so many easy one-on-one plays.”

The team outscored Boston 35-23 in the second quarter behind strong performances from Irving, LeBron James, and the Canadian war machine, Tristan Thompson.

Thompson’s energy led to offensive rebounds and putbacks, giving the Cavs the shot needed to wake them from their stupor and propel the team to a 62-54 lead at the half.

Coming out of the halftime break, the Cavs continued their onslaught, featuring a strong bounce back performance from Love who struggled on the offensive end to start the game. Love got to the line and played tough down low, pushing the Cavs to a 20-point lead.

“Teams are going to make runs,” Blatt said at the break. “They made nice run at us, and we stopped the bleeding by getting a few stops on defense, and executing better on offense.”

The pace of the game slowed down in the fourth, as the Cavs maintained their lead and the Celtics lacked the firepower to get back in the game.

With the nerves of the first game out of the way, it will be interesting to see how both teams start game two when the real test begins. How will both teams adjust going into the next game? It will be exciting to see on Tuesday.