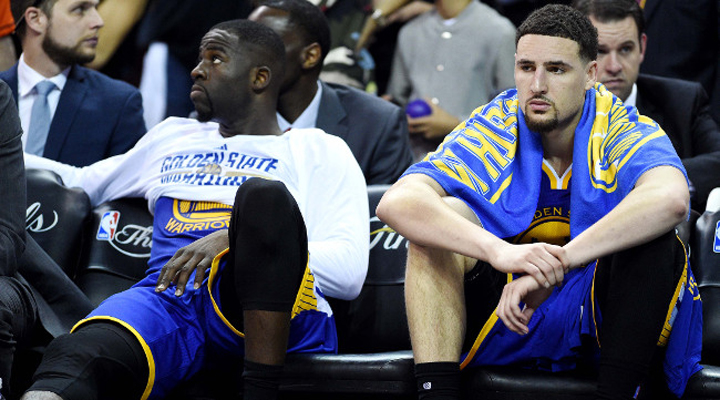 Draymond Green is an emotional player. He comes at teams hard and ferociously and is not afraid to take prisoners along the way.

His antics during these playoffs have been borderline dirty, and he was even suspended for Game 5 due to an altercation he had with LeBron James late in Game 4 of the NBA Finals.

But regardless of the way he acts between the lines, his sportsmanship and quality of character outside the lines cannot be questioned.

Green proved that Sunday night after Game 7 when he remained on the Oracle Arena floor in order to congratulate James and the rest of the Cleveland Cavaliers.

And while Green’s congratulations were not unnoticed, so were the actions of one of his teammates, Klay Thompson. Thompson, instead of remaining on the floor, went directly to the locker room without shaking hands with a single Cavs player.

Thompson did later congratulate the Cavs on defeating the Warriors and taking home the Larry O’Brien Trophy, but it was in the midst of a media scrum and was likely only after someone had pointed out to him how his actions were being perceived.

Since then, Green has gone on record with Marc Spears of The Undefeated in a playoff diary, and has given some pretty strong language as to why he felt it was necessary for him to stay on the floor and shake hands with Cleveland’s players.

“I just knew that going to the locker room after the game wasn’t right. That’s what a loser does. I’m not a loser. They earned it. They took it from us. It’s right to tell them congratulations,” said Green. “I made sure I got to everybody. The coaching staff. The players. Security guys. Everybody. They earned it. They never quit. I just wanted to make sure I got to everybody.”

And while the quote doesn’t specifically mention Thompson as being a loser, it certainly shows just how strongly Green feels about the way in which he and his teammates should conduct themselves in the face of a historic defeat.

As Dime Magazine pointed out, however, Green is not the type to use the media for sending messages to teammates, coaches or anyone else in the basketball world. However, one can be sure that if his comments were directed at Thompson, or any member of the Warriors, his comments to their faces were likely just as strong, if not stronger.