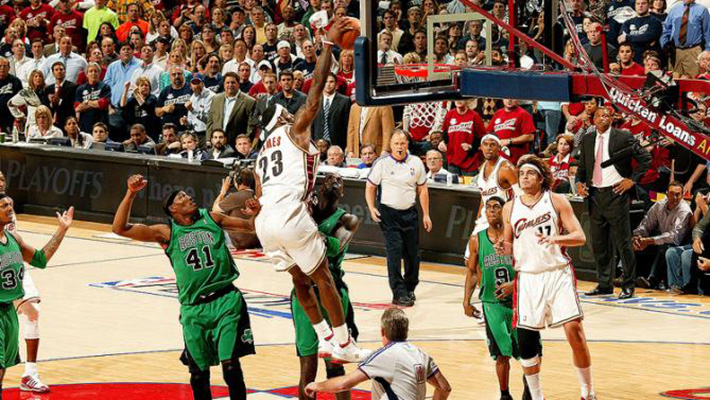 Every superhero has that one foe that pushes him to the brink. For every Batman, there lives a Joker and every Superman has his Lex Luthor.

Such can be the case in our beloved sports as well. Michael Jordan had the Detroit Pistons. Wayne Gretzky had the New York Islanders. Peyton Manning has the New England Patriots.

Each and every one of the greats has that one team that brings out the best in him, that pushes him to his limit. Just the thought of that bitter rival gets his blood pumping and causes the hair on the back of his neck to stand at full attention.

For LeBron James, that team is the Boston Celtics. Throughout the course of his illustrious 11-year career, the level of distaste the “King” possesses for his Celtic counterparts has been no secret.

What a fitting way for LeBron to kick off his first playoff run back in a Cleveland Cavaliers uniform than with his old Beantown buddies.

In the spirit of the moment, here are LeBron’s most memorable moments against the rival Celtics.

Just over two weeks into the 2014-15 regular season, fate once again brought Cleveland’s prodigal son up against his fiercest foe. Although Boston’s “Big 3” had since vacated Beantown, the spirit of the rivalry raged on. In one of the Cavs’ largest comebacks of the season, their newly-returned King contributed a massive 41 points, seven assists and four rebounds to will the Wine & Gold back from a 17-point fourth quarter deficit, ultimately leaving the Garden triumphant with a 122-121 victory.