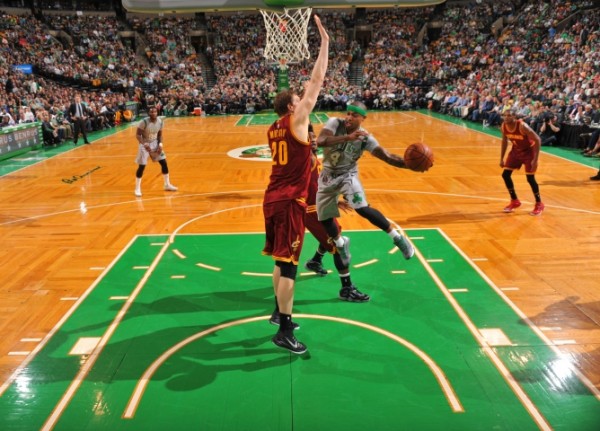 (Boston, MA) — In a game where the Cleveland Cavaliers (51-29) rested four of their five starters, the reserves got extra floor time on Sunday afternoon and were blown out 117-78 by the Boston Celtics (38-42) at TD Garden. As the regular season winds down, a second-seeded Cavs vs. seventh-seeded Celtics matchup in the first round of the 2014-2015 NBA Playoffs seems very likely.

The Celtics took full advantage of having a fully active roster and the opportunity to clinching a playoff berth. Celtics head coach Brad Stevens’ squad, who continue to play very well after the All-Star break, fired on all cylinders on Sunday afternoon.

“Yes we are one game away, but winning a game in the NBA is pretty difficult,” said coach Stevens after his team’s victory.

“For me personally, it’s everything,” said Thomas. “In my NBA career, I haven’t been to the playoffs and it’s something I want to experience. I’ve heard it’s fun, exciting, and a new season.”

For the Cavs, who did lead 22-21 at the end of the first quarter, put together a pretty dismal performance for the remainder of the game. Iman Shumpert, who made his first start of the season for the Cavs, finished the game with a double-double as he had 15 points, 10 rebounds and three assists. Tristan Thompson and James Jones were the only other Cavs to score in double figures, as they both contributed 14 points apiece.

Up next on their slate, the Cavs will finish their regular season with their final two games at Quicken Loans Arena. On Monday night, Cleveland will host the Detroit Pistons (31-49) at 7:30 pm ET before closing their regular season on Wednesday night against the Washington Wizards (45-34) at 8:00 pm ET for Fan Appreciation Night.