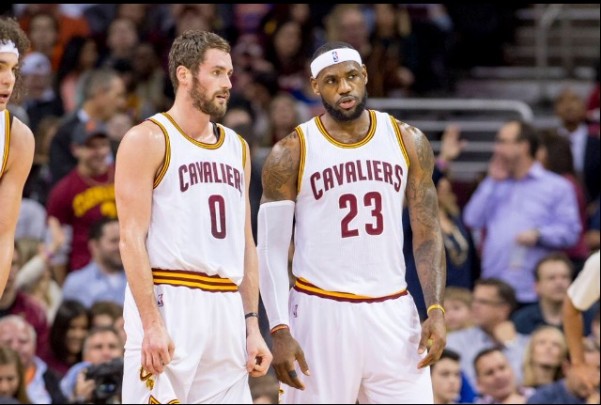 In the latest instance of a media outlet hyping the supposed discord between the Cleveland Cavaliers’ LeBron James and Kevin Love, Frank Isola of the New York Daily News is reporting that James is allegedly “frustrated” with Love, which could lead to the latter’s departure after this season.

Isola describes the lingering controversy as a “rift,” despite being 500 miles from the Cavaliers’ home base. Meanwhile, his main evidence consists of anonymous sources who are reportedly close to the situation. He also cites Love’s radio comments from Monday, which also sparked plenty of media attention, as further evidence.

Like previous rumors that had Love headed to the Los Angeles Lakers after this season, this article seems to be based more on wishful thinking than having any basis of truth connected to it.

The fact that a New York writer is making this claim while also pointing out that the New York Knicks will have plenty of cash available to sign free agents makes the alleged rumor suspect.

To start with, the Knicks currently have the worst record in the NBA. When Love announced he wanted to be traded from the Minnesota Timberwolves last year, he cited the team’s inability to reach the postseason as one of the reasons.

This wouldn’t be the first time that those in the Big Apple looked toward a Cavs player as a potential savior. After James signed with the Miami Heat in July 2010, many in the city were upset as if it was a given that he would sign with the Knicks. That sense of entitlement seems to be in evident in this case with Isola.

If there is a rift between the two players, they appear to be doing a good job of hiding their animosity. Following Cleveland’s Wednesday night rout of the Memphis Grizzlies, Love photobombed James’ post-game interview to wish his mother a happy birthday.