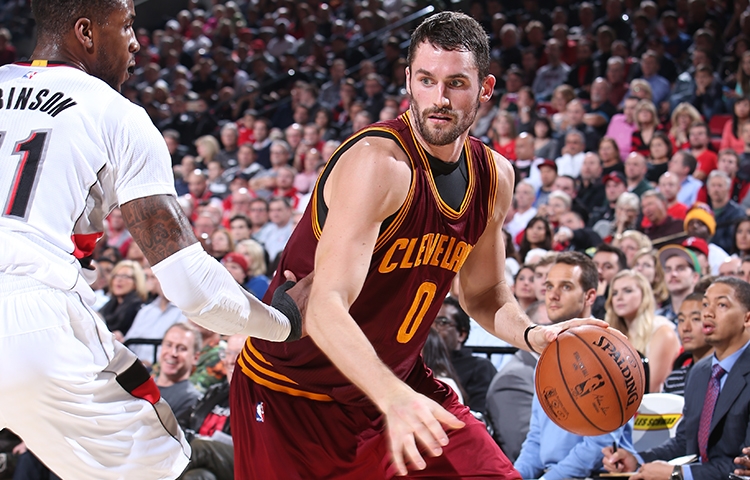 Well that didn’t take long. Five games (and three losses) into the 2014-2015 campaign and we already have our first rumor that sends Kevin Love on the first flight to Los Angeles to play with Kobe Bryant and Jeremy Lin.

As we all know, the two time NBA All-Star has an opt-out clause at the end of the season. Given the fact that his max salary will increase by nearly $2 million next season due to the league’s increased salary cap, it’s almost certain that K-Love will opt out of the current deal that’s going to earn him a projected $16,744,219 during the 2015-16 campaign. Now the question is, will Love decide to keep his talents along the shores of Lake Erie, or will he jet off to the sunny skies of Laker land.

Keep in mind that over the summer the Cleveland Cavaliers and Love put into place a “handshake agreement” that would keep the star forward in town for at least the next couple of seasons. However, Bulls.com writer Sam Smith reports that indications have Love leaning towards returning to southern California where he spent his college days.

“It’s not going to get as much discussion during the season, but one of the biggest issues for the Cavs is that both LeBron James and Kevin Love own opt outs after this season. LeBron James basically cannot afford to go anywhere after his return to Cleveland. But watch out for Love. Indications are he will seriously consider the opt out and has his eyes on a return to Los Angeles, where he attended college and where the Lakers long have had him on their free agent wish list.”

Obviously his best shot at winning remains with the Cavaliers, but if the early struggles for the team continue he may choose to play with the Los Angeles Lakers, who would possibly be able to use him more efficiently in the post. One thing Love has gone on record saying is that his whole life he’s played the game from the inside-out.

“The more touches I can get inside to get myself going, the better. I’m not accustomed to starting out a game shooting a three,” he told Chris Haynes of The Cleveland Plain Dealer.

Another factor to take into account is that the Lakers will have more cap space following a frugal 2014 offseason. The Lakers have held Love pretty high up on their free agent wish list for years now, and their time to strike could come this offseason should the Cavs fall victim to an early playoff exit.

Clearly, this is one of the conundrums the Cleveland front office struggled with over the summer when deciding if trading first overall draft pick Andrew Wiggins was worth the possible one-year rental of the all-star forward. One thing the Cavalier faithful can hang their hats on is the quote from Love in his Players Tribune article.

The perennial all-star says, “I came to Cleveland because I want to win. I’ll grab the broom and sweep the floors if it helps get me to an NBA Title.” So if there’s one thing to take from all this, it’s that Love will suit up for whoever gives him the best shot to hold the Larry O’Brien trophy in June.