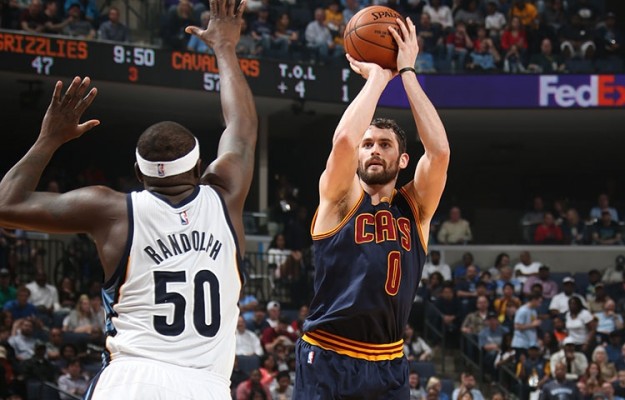 (Memphis, TN) – The Cleveland Cavaliers (47-26) made a statement to the rest of the NBA in their 111-89 victory against the Memphis Grizzlies (50-22) Wednesday night on the road at FedExForum.

The win extends the Cavs’ current win streak to four games, and moves the team one step closer to locking up the two seed in the Eastern Conference.

The 22-point loss is the worst home loss for the Grizzlies this season.

“It was an old fashioned beatdown” Memphis guard Tony Allen said after the game.

Before the game at shootaround, Coach David Blatt was asked to describe the team personality at this point in the season.

“Determined to fulfill potential,” Blatt said. “If I had to put it in one word, that would be the best.”

The Cavs did just that in a one-sided contest that was competitive for about one quarter.

The game started as one would expect a matchup against the Grizzlies to go: a lot of grit, a lot of grind, and not a lot of points. The Cavs held the lead at the end of the first quarter 22-19, while both teams shot under 43% from the field.

From that point, the Cavs turned up the pressure on both ends and ran away with the game behind a strong all-around performance from Kevin Love (22 points, 10 rebounds, four assists). Love dissected the Grizzlies defense whenever he saw the floor, and was crucial to the Cavs’ third quarter offensive onslaught (36 points, 73.7% shooting).

Outside of Love, the starting five contributed a balanced effort with LeBron James scoring 20 points, Kyrie Irving with 24, J.R. Smith with 13, and Timofey Mozgov with 14.

Although the playoffs don’t start for another month, the Cavaliers look ready to start tomorrow. The Cavs walked into a hostile environment where offenses go to die, and put up 111 on the Grizzlies.

Memphis hasn’t surrendered that many points since Jan. 3rd against the Nuggets when Arron Afflalo and Timofey Mozgov were still in town, and Brian Shaw wasn’t reading books on how to connect with millennials.

Some Grizzlies staff were overheard saying it was the worst loss in five years.

Ironically James told reporters earlier in the day that the team didn’t need to make any statement wins at this point in the season.

“As far as sending a message, we’ve done our job in this league this year,” James said at shootaround. “Teams know and the league knows what we’re about. We don’t need one game to send another message.”

And if you don’t know, now you know.

On the offensive end, the Cavs looked positively Spurs-ian, finishing the game with 30 assists on 43 made baskets, while bombing from beyond the arc, shooting 14-34 from three.

On the defensive end, the Cavs bullied the Grizzlies on the boards (49-32 rebound advantage) and forced Memphis into contested mid-range shots all night (43.5% shooting). The Grizzlies never established a rhythm on the offensive end due in large part to the defense played by the Cavs big men.

Mozgov battled Zach Randolph for a majority of the night, holding Randolph to just five points and three rebounds, and basically taking the Memphis big man out of the game entirely.

Love had the unenviable task of defending Marc Gasol for a majority of the game. Gasol was able to score 15 points, but Love largely kept the Spaniard off the boards, as Gasol finished the night with only three rebounds.

The Cavs have a day to recuperate before their game against the floundering Brooklyn Nets who may be without Thaddeus Young after he was helped off the court during the win against the Charlotte Hornets.

One thing that is for certain, with only nine games left before the real test begins, the Cavaliers look to be ready for whatever awaits them.