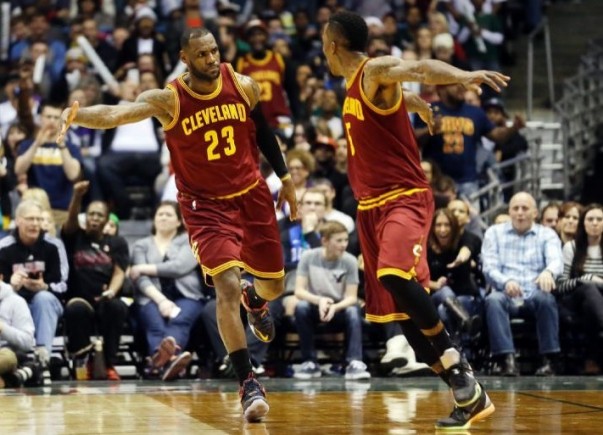 (Milwaukee, WI) – Roaring back with a 31-9 run that began in the latter stages of the third quarter, the Cleveland Cavaliers won their third straight game as they knocked off the Milwaukee Bucks in a 108-90 victory at the Bradley Center on Sunday afternoon.

The trio of LeBron James (28), J.R. Smith (23) and Kyrie Irving (20) combined for 71 points in the win, with James also adding 10 rebounds for a double-double and Smith hitting seven of nine threes.

After the game, Smith talked about the comeback, saying, “We stopped worrying about fouls and started playing our game.” He also commented about how the surge was able to take shape, adding, “Against guys like this, you’ve got to outsmart them, and we have more experience.”

With the Bucks leading 69-62 with 3:27 left in the third, the Cavaliers began the first portion of their comeback with a 13-4 run to close out the quarter to hold a 75-73 lead. James’ put back tied it with 44.2 seconds to go, which was followed by Iman Shumpert’s basket with 5.9 seconds left.

The Cavs were then able to boost the lead to five at 81-76, but both teams then went cold for two minutes before Cleveland went into overdrive by outscoring Milwaukee 12-2. During this push, the tandem of James and Smith led the charge, with James connecting on a three followed by three unanswered treys from Smith that gave the Cavaliers a 93-78 lead with 6:19 to play.

Explaining why he became animated during the team’s continuing struggles leading up to the comeback, James said, “I was upset about the way we were playing, and I let our guys know and they picked it up.” James was also asked about how he’s been a key component of the team’s fourth quarter play the last two contests and responded by saying, “I feel really good about my game and my body.”

For the remainder of the game, the Cavaliers kept the margin in double figures and won their 27th contest in the last 33 games. Shumpert put an exclamation on the comeback by connecting on a three with 4.9 seconds left.

Irving’s assessment of the comeback was a simple one that addressed how James became much more vocal during the third quarter. “Urgency was something we needed in the second half,” said Irving. He then added, “We just got stops, buckled down and made a stand. We just needed to get ahead, and then we knew what to do.”

Blatt praised Smith’s performance, saying, “He’s learned how to play with those guys and he knows his spots.”

Early on, Milwaukee scored the first seven points of the game, and led 10-2 before the Cavaliers were finally able to score a pair of unanswered baskets. The Bucks maintained that eight-point margin at 19-11, but the Cavs then put together a 14-1 run that gave them a three-point lead at 25-22 on an Iman Shumpert three with 1:43 left in the quarter.

After two baskets to close out the quarter gave Milwaukee a 26-25 lead, Shumpert tallied the first basket just 19 seconds into the second period. However, the Bucks then ran off six straight points to make it 32-27.

The two teams then traded baskets over the next few minutes until Milwaukee was able to slowly inch its lead up for the remainder of the quarter. A basket with 1:02 to go before intermission gave them a 53-44 lead, which is where the scoring stopped for the half.

James was asked what was said in the locker room at the half that helped the Cavalier defense hold the Bucks to just 37 second half points, including just 21 in the final 15 minutes. “We came in the locker room and made adjustments. We talked about exploiting their defense,” said James.

Both teams had problems holding onto the ball in the opening quarter, combining for 14 turnovers. That sloppiness continued in the first four-plus minutes of the second with six more miscues.

When play resumed, the Bucks boosted their lead to 11 at 57-46 before the Cavs were able to whittle the margin to just three on a pair of occasions. With the score 63-60, Milwaukee notched six of the next eight points to back up by seven at 69-62, at which point Cleveland turned on the switch to collect the win.

Blatt indicated the Cavaliers were still experiencing some lingering fatigue from their road-heavy schedule since mid-February, “I’m not sure we’re completely over the stretch of road games,” and also spoke of the team’s slow start. “We just relaxed from an intensity and energy standpoint. We weren’t where we needed to be,” said Blatt. However, he was eager to get a few days off, saying, “We’re going to have a chance to practice and work on things. We’ll also get some rest.”

The Cavaliers now head to Memphis for a big Wednesday night matchup against the Grizzlies that will tip off at just after 8 p.m. Eastern.