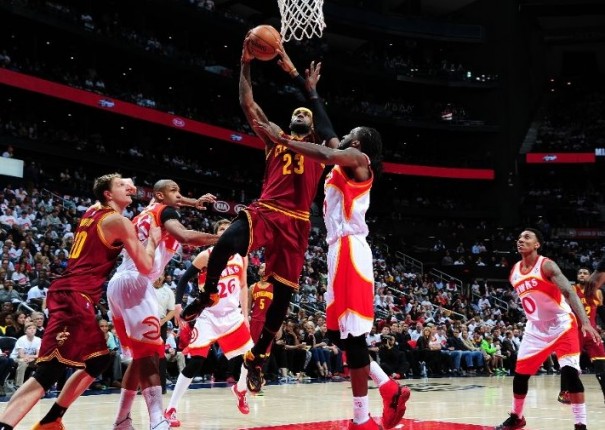 (Atlanta, GA) – Despite a spirited third quarter comeback by the Cleveland Cavaliers, a 23-6 run by the Atlanta Hawks was fatal to the Cavs’ hopes as they dropped a 106-97 decision at Philips Arena on Friday evening.

Cleveland had trailed by as many as 17 before charging back in the third quarter to take a few brief leads. Tristan Thompson’s two free throws with 2:13 left in the third made it 77-75 Cavaliers, but the Hawks dominated play the rest of the way, boosting the lead back up to 15 at 98-83 with 6:50 to go.

James noted a different look to the opposing defense, saying, “They changed their approach, but it’s something we’ll keep in mind if we meet them again.” That approach included limiting Cleveland’s presence in the paint, forcing them to take 38 of their 69 outside shots from beyond the three-point line.

Prior to the comeback, Atlanta had maintained a double-digit advantage for most of the game, never letting the Cavs get closer than nine points during that stretch. Trailing 63-52 with just under nine minutes to go in the third, Cleveland made a 14-2 run to give them their second lead since the opening moments. Timofey Mozgov nailed both ends of his free throws to make it 66-65 with 6:15 left in the quarter.

A few deadlocks and some trading of the lead followed, but the Hawks scored six of the last eight points to take an 81-79 lead after three quarters, then kept up the surge in the fourth.

Cavs’ head coach David Blatt talked about the fourth quarter fade in postgame comments, saying, “We lost some defensive focus at the beginning of the fourth quarter. When we were defending well and got the ball up the court, we were fine.”

Irving said, “We did what we could to get back in the game. We just have to have consistency at both ends.”

The Cavaliers had been on the verge of getting blown out early, with an 11-10 one-point deficit at the 7:36 mark of the first quarter quickly turning into a 36-19 Atlanta lead when the horn sounded after one period.

The Hawks were torching the nets in the opening stanza, connecting at just under 71 percent, while the Cavaliers struggled at just 40 percent. Atlanta also showed good ball movement, adding 10 assists, while the Cavs had problems just holding onto the ball with six turnovers.

The Cavaliers notched eight of the first 10 points of quarter number two to whittle the margin back down to 11, but again struggled to get any closer.

With 6:55 to go before halftime and the Cavs trailing 46-33, James drove to the basket and scored, but the basket was disallowed and James was assessed an offensive foul. That caused Blatt to erupt, giving him his first-ever NBA technical foul.

Asked afterwards, Blatt said, “I just think LeBron’s getting hit every time going to the basket, and it gets ignored.” He added soon after, “When it happens continuously, it’s worrisome. There’s a limit that has to be reached.”

James felt that the aggressive defense he’s dealt with over the past week was simply strategy, saying, “I think that’s the game plan. Get the hard foul on me.”

A twisting layup by Irving with 4:55 left before intermission made it 47-38 in favor of the Hawks. Each team then closed out the half with runs, with Atlanta tallying six straight before the Cavs scored the final five points to make it 53-43 at the break.

The defensive improvement in the second quarter by Cleveland was evident from their holding the Hawks to 33 percent shooting from the field. On the offensive side, James struggled mightily, hitting on just one of his seven first half field goal attempts while turning the ball over six times.

James was blunt in assessing the turnovers, saying, “I sucked. I have to do a better job,” though he boiled down the loss to two issues. “We had 19 turnovers and gave up 54 points in the paint. We cut that in half and we’re a much better team,” said James.

When asked about the mistakes, Irving said, “Too many turnovers. That’s a telltale sign with our team.”

Despite the loss, Blatt was upbeat about the team’s comeback, saying, “You have to work hard to come back, and to our credit, we did. It showed some character on our part.”

The final game of a four-games-in-five-nights stretch ends tomorrow night for the Cavaliers when they host the Phoenix Suns in a home game set to tipoff at 7:30 p.m. ET.