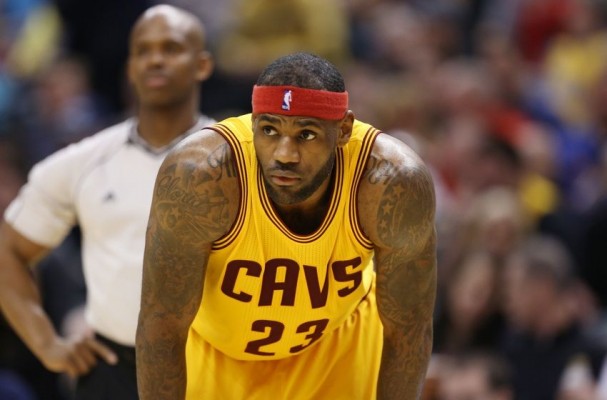 (Indianapolis, IN) — The Cleveland Cavaliers (37-22) travel to the Hoosier state on Friday to face off against the scrappy Indiana Pacers (23-34). The Cavaliers have won 18 of their last 20 games, and have won four in a row.

The Cavs are entering Friday on the back of their most impressive and meaningful win of the season, a win over the Golden State Warriors 110-99. The game was a back and forth affair in the first half, but the Cavs came out in the second half and played with intensity and focus.

After the Cavs extended their lead to 11 in the opening minutes of the second half, the Warriors were never able to cut Cavs’ lead down to less than nine points.

At the spearhead of the Cavs attack was James who had himself a night. LeBron recorded 42 points on 25 shots to go along with his 11 rebounds, five assists, and three steals. James was a force of nature for four quarters, bombing from deep and destroying whoever opposed him down low.

While James carried the load on the offensive end, it fell largely to the role players to corral the deadly duo of Steph Curry and Klay Thompson. Their contribution won’t jump out in the box score, but J.R. Smith, Iman Shumpert, and Tristan Thompson played about as well as could be expected against the offensive onslaught of the Warriors. C

Coach David Blatt was especially vocal regarding the performance of Smith and Shumpert after the win. “J.R. Smith played 35 minutes tonight, and Iman Shumpert played 31 minutes. Between the two of them they had four points. But the Splash Brothers were 10-30 from the field. That’s why they’re on the court, and that’s why we’re winning. Because of that selfless attitude.”

As for Indiana, the Pacers are very quietly putting together a nice stretch of basketball, winning six of the team’s last eight games, including victories against the Cavs, New Orleans Pelicans, and Warriors.

While they do have some serious talent, the Pacers’ main strength has been the impeccable coaching of Frank Vogel, and his patented brand of defensive basketball. It will take a 40-minute effort to put them away.

Keys to The Game:

1. Don’t Take the Foot off the Pedal

When the Cavs don’t feel that a team is on the same level as them, they tend lower their intensity, a problem readily apparent the last time these two teams faced each other. The Cavs showed the world a gear many didn’t think they had on primetime T.V. Thursday night. This effort level needs to carry over to Friday, because the Pacers will bring it for a full four quarters.

With the unfortunate news of Irving’s shoulder injury, it will be imperative for Blatt to effectively stagger the Cavs’ rotations Friday. The team is normally spoiled with two dominant ball handlers who are equally effective off the ball. With Irving out, the team will need to adjust against the Pacers to ensure that the offense doesn’t stagnate when LeBron is off the floor.

Roy Hibbert is an intimidating presence in the paint for the Pacers, but he should not scare the Cavs away from the paint. You beat a team like the Pacers by derailing their defensive game plan, not taking what they give you. The Cavs need to attack the heart of the Pacers defense, find the cracks, and hammer them relentlessly.