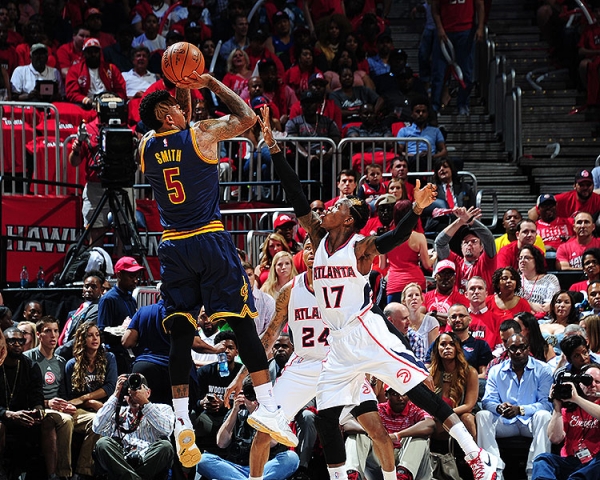 (Atlanta, GA) — In a gritty, hard-fought contest between the two best teams in the East, the Cleveland Cavaliers (1-0) secured a thrilling 97-89 victory over the Atlanta Hawks (0-1) on Wednesday night at Philips Arena.

The Cavs and Hawks traded blows throughout the entire game until the fourth quarter, where Cleveland exploded behind J.R. Smith‘s record-setting night. After quietly padding their lead to 74-67 over the Hawks at the end of the third quarter, Smith and the Cavs went on a shooting rampage to extend their lead to 85-67 with 9:59 remaining in the game.

Smith, who scored all off the Cavs’ bench points on the night, erupted for 28 points on an astounding eight of 12 shots from behind the arc to go along with eight boards and three assists. His eight three pointers made were a Cavs playoff record, as well as an NBA all-time record with 14 games in which Smith has drained eight or more treys.

After coming over from the New York Knicks along with Iman Shumpert, the shooting guard has been absolutely superb for the Cavaliers.

“I was just trying to, if anything, take good shots,” said Smith after the game. “I got in a rhythm early and just stayed aggressive. I’m in a great mood and my coaches have been helping me out a lot with my shot.”

LeBron James was Smith’s partner in crime on the night, as the 11-time NBA All-Star put forth a spirited effort en route to 31 points (12 of 26 from the field and an efficient seven of eight from the charity stripe), eight rebounds and six assists. With his performance, James passed Chicago Bulls legend Michael Jordan for first on the all-time playoff list with 52 games of at least 30 points, five rebounds and five assists.

“I think between tonight and Game 2, the mindset is just there’s a lot of things we can do better, a few things we can build on,” said Hawks head coach Mike Budenholzer. “But there was a stretch early in the fourth quarter where they were able to create a little bit of separation and a lead. A few things happened during that time and we’ve got to do better.”

With a late Atlanta rally to cut the Cavs’ lead to 91-87 with 47 seconds left, James took the game into his own hands. The four-time NBA MVP drove down the lane for a ferocious one-handed slam dunk, which sealed any chance of a Hawks comeback.

Tristan Thompson (14 points, 10 rebounds and two blocks) and Timofey Mozgov (10 points and 11 rebounds) both had double-double efforts for the Cavs, as they were solid on the offensive end and played great defensively. Star point guard Kyrie Irving, who continues to battle a myriad of injuries this postseason, contributed 10 points, six assists and three boards in 27 minutes of action.

“He’s such a great teammate. Everybody’s just concerned for DeMarre,” said Coach Budenholzer. “I’m hoping that he’s healthy and ready to help us as soon as possible. That’s how we feel about each of our teammates, each of our players. There’s that same feeling about DeMarre, and it’s the playoffs. Everybody would like to come through this as healthy as possible.”

Up next for Game 2 of the Eastern Conference Finals, the Cavs will get right back at it against the Hawks on Friday night at Philips Arena. The contest, which is slated to tip off shortly after 8:30 pm ET, will be broadcast nationally on TNT.