Season Rewind: An In-Depth Look at Blatt’s First Season as an NBA Coach 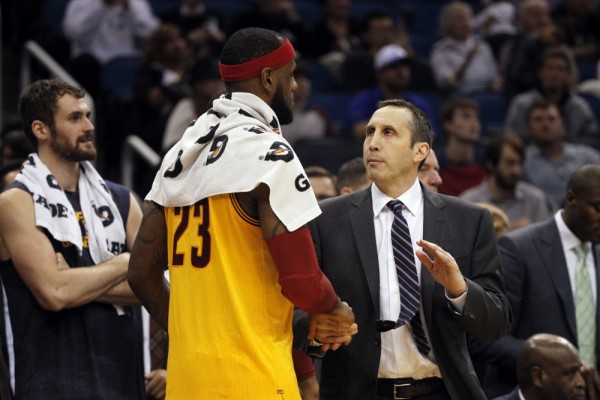 Since the very beginning of his tenure with the Cleveland Cavaliers, rookie head coach David Blatt has faced continuous pressure to turn a Cavs franchise around that hasn’t sniffed the playoffs since LeBron James left for the Miami Heat after the 2009-2010 season. Within one week of Blatt being hired as Cleveland’s new head coach, LeBron opted out of his contract with the Heat and on July 11th officially announced his intent to rejoin the Cavs, thrusting them to championship contention.

Immediately the team received a massive facelift, as the first-year coach now had four first overall draft picks on the roster in James, Kyrie Irving, Anthony Bennett and Andrew Wiggins, with recent top-five picks Tristan Thompson and Dion Waiters as well. However, the sudden off-season roster shakeup was far from over for Blatt.

On August 7th, Wiggins and Bennett were traded to the Minnesota Timberwolves for three-time All-Star Kevin Love in a blockbuster deal. In such a short time, the Cavs had formed their own “Big Three” with LeBron, Irving and Love. At first glance, many people had no idea how a seemingly unknown rookie NBA head coach would be able to handle a team filled with superstars. However, Blatt was far from “unknown” while overseas and was even considered a legend in Europe.

Outside of coaching Israel’s Maccabi Tel Aviv to a 2014 Euroleague championship as well winning the 2014 Euroleague Coach of the Year, Blatt compiled a highly impressive resume in Europe that caught Cavs general manager David Griffin‘s eye.

“David is a great basketball coach and a special person. His abilities to communicate, to build relationships with his players and to foster winning environments at several stops throughout Europe and across the highest levels of International competition speaks for itself. He brings unbridled passion, energy and creativity to his craft. These qualities have enabled David to reach a level of success that is truly unique,” said Griffin on his decision to hire Blatt to lead the Cavs. “I have watched David’s work for many years. He has an uncanny ability to adapt his system to maximize the talents of his teams year after year. That is why I am very confident he will make a smooth transition to the NBA.”

During his six years as head coach (2001-03 and 2010-2014), Blatt led Maccabi Tel Aviv to six Israeli Cup Championships and five Israeli League Championships. As the head coach of Russia’s national team, Blatt led his players to a bronze medal during the 2012 Summer Olympics in London.

Once the regular season came around in late October, Blatt’s high-profile coaching resume in Europe would immediately be put to the test as the Cavs stumbled out of the gate en route to a 5-7 start. However, things took a turn for the better to strengthen Blatt’s confidence as Cleveland won 12 of its next 15 games, including a stint of eight wins in a row between November 24th and December 10th.

From the get-go, not all things were smooth sailing between Blatt and his players. For instance, Blatt was criticized in the early stages of the season for being silently boxed out of his team’s huddle multiple times on camera, while LeBron seemingly coached the team. Another rift was captured on national TV when Irving disagreed with a timeout that Blatt called in the closing seconds of the Cavs’ 90-87 win over the New York Knicks,

The notion left Irving visibly upset with his head coach, however, Blatt would end up designing a play to put the ball right back in his star point guard’s hands for a game-clinching layup with 10 seconds remaining.

“I saw something different out there, but that’s just part of the game,” said Irving regarding his reaction to Blatt’s timeout. “He called timeout, drew up a heck of a play, trusted me with the ball at the end of the game, and we’re getting used to one another.”

Just as Blatt and his squad were beginning to develop seemingly strong team chemistry at last, the 17-10 Cavs received horrible news following their 125-104 dismantling of the Minnesota Timberwolves on December 23rd. Anderson Varejao, who was the Cavs’ true starting center, was notified that he had torn his Achilles tendon and would miss the rest of the season. He had been having a productive offensive season, as he shot 55% from the field and averaged 9.8 points and 6.5 rebounds per game.

The news was not what the first-year head coach had in mind, but the unexpected 2014 end-of-year downward spiral had just begun for Blatt. Within the next week, the NBA’s best all-around player in James would shut it down for an extended period to rest nagging back and knee injuries.

In addition to LeBron’s ailing health issues, Irving and Love had their share of lingering injuries as well that noticeably hindered the Cavs’ team chemistry. The out-of-sync team struggled immensely in the early stages of the transition from 2014 to 2015, going on a stretch of 10 losses in 12 games to drop Cleveland to 19-20 on the season.

Something had to be done immediately by Blatt to right the highly unstable ship, as LeBron would return from injury to play with three new teammates acquired via trade: Timofey Mozgov, J.R. Smith and Iman Shumpert. With the core part of roster finally healthy at the same time, the new group of players visibly were able to adapt to their new teammates and Blatt’s system as the Cavs went on yet another winning streak.

From the middle of January through the first week of February, the Cavs cranked out 12 straight victories en route to a 31-20 record. The feat, which fell one game short of matching the team’s two separate 13-game winning streaks during the 2008-2009 and 2009-2010 seasons, has since thrusted Cleveland back among the NBA’s elite and championship contention.

With the Cavs now holding a respectable 33-22 record at the All-Star break, Blatt and his team face a tough road ahead of them. Outside of the Cavs having to close February with four of their five remaining games on the road (the lone home game will be versus the current top seed in the Western Conference, the Golden State Warriors), Cleveland will need to endure a brutal March schedule. On the horizon in March, coach Blatt and his team will travel to the likes of Houston, Toronto, Atlanta, Dallas, San Antonio, Milwaukee and Memphis.

The most detrimental factors to Blatt’s team being successful for the remainder of the season are keeping his players on the same page with excellent team chemistry and maintaining a healthy rotation. There is no question the talent is there for the Cavs, but the players’ absolute trust in Blatt’s 20-year pedgiree as a proven winner will help put this team over the top.