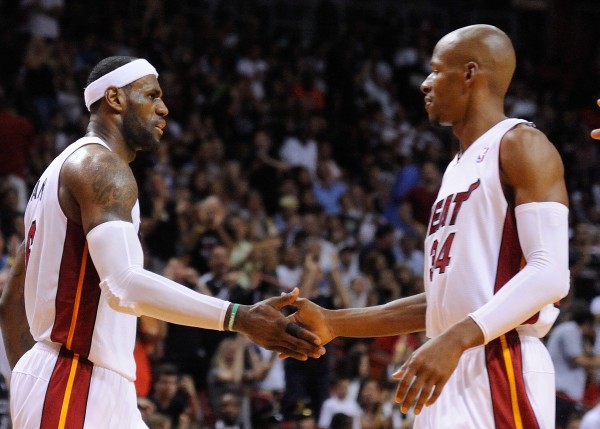 LeBron James made a few friends during his four years spent on South Beach. A couple of them – Mike Miller and James Jones – he brought back home with him to Cleveland, and according to Dave McMenamen of ESPN.com, a third, Ray Allen, could be on the way.

During James’ recent rehabilitation back in Miami, he and Allen met to discuss the possibility of the former UConn product joining “The King” along the shores of Lake Erie to chase one last title, McMenamen reports.

At the halfway point of the season, Allen has yet to decide whether or not he will suit up to play a 19th season. If he chooses to put off retirement for another year; however, the Cavaliers seem to be his likeliest suitor.

When asked just this week about his desire to continue his career, Allen told the Sun-Sentinel,

As the current Cavaliers roster is composed, there remains no lack of depth at shooting guard — Allen’s natural position — with JR Smith, Mike Miller, James Jones, Joe Harris and Iman Shumpert all suiting up at the two. But it is hard to imagine the NBA’s All-Time leading three-point shooter being a surplus to requirements.

The former star of Spike Lee’s “He Got Game” has amassed 24,505 points, 5,272 rebounds, 4,361 assists and 2,973 three point field goals over the course of his illustrious career. The ten-time All-Star was drafted with the 5th pick in the 1996 NBA Draft and has since played for the Milwaukee Bucks, Seattle Supersonics, Boston Celtics and Miami Heat, amassing numerous records and two championship rings along the way.

Allen is expected to make a decision on his future sometime next month.