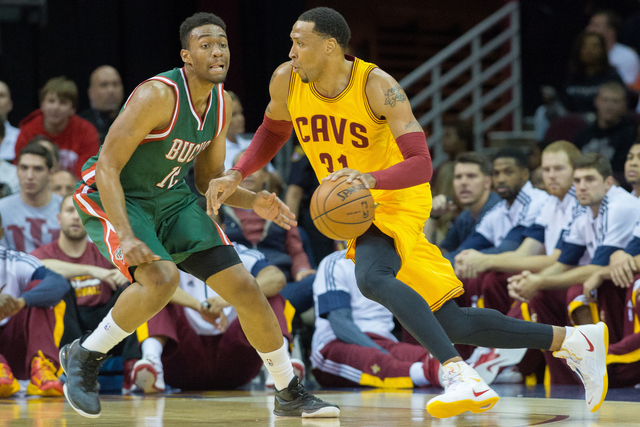 (Cleveland, OH) – The Cleveland Cavaliers will face off against the Milwaukee Bucks tomorrow in a potential playoff preview … just like we all anticipated right?

The Bucks have been one of the big surprises this season, starting off strong at 10-8, after winning eight of their last 12 games.

Head Coach Jason Kidd so far has been able to harness the Bucks’ freakish length and athleticism to give opponents fits. The Bucks have largely feasted on a cupcake schedule, with wins over the Detroit Pistons, Minnesota Timberwolves, and Indiana Pacers, but they’ve also recorded wins against stronger opponents like the Memphis Grizzlies, and Miami Heat.

The Cavaliers on the other hand, are sitting behind the Bucks at 8-7, after winning three straight against the Orlando Magic, Washington Wizards, and Pacers.

Fueling this streak has been the re-emergence of Kevin Love in the offense, and a more aggressive Cavaliers defense headlined by a focused Kyrie Irving (again, no surprises).

Coach Blatt has taken notice, and attributed Kyrie’s improvement to his natural progression as a player. “I think you guys see it. He’s doing a great job at both ends of the floor,” Blatt said Monday after practice, “Kyrie came into the league at 19 years old with only eight games in college under his belt. He’s developing parts of his game as we go along that are appropriate for any young player; only he’s done it in the front of the world because he’s such an exceptional talent. He’s recognized, and we’ve recognized, how important it is for him to round out his special game, and he’s taken that to heart, and is doing everything he can to become the complete player we’re seeing right now.“

Irving’s improvement has been evident to anyone watching. He’s fighting through screens, and has played very opportunistic defense, averaging 1.6 steals per game, 5th best among point guards. While his defensive rotations still leave something to be desired, Irving is showing a commitment to the defensive end of the floor not seen before from the young point guard.

LeBron James was asked about Irving’s defense, and he made sure to highlight Irving’s importance to the team’s defensive success. “It’s great for our team. We need it, he’s the point of attack. Our league is a point guard driven league, and when you have someone who can defend point guards, beat guys over screens, compete, and then being one of our big guys, it helps our team so much.“

The Cavs have tasted success this season, but also serious disappointment, and James is focused on not letting the team swing too far in either direction this early. “We shouldn’t be a team that gets too high or too low about anything,” James said, “We haven’t done anything. We should be excited about the way we win, but we learn from the mistakes that we still make throughout those wins, and we learn from the mistakes in our losses as well. It’s too long of a season and, we have too much room for improvement to be getting too high on wins.”

The Cavaliers have shown significant improvement throughout this three-game winning streak, but they will be tested Tuesday by a long and athletic Bucks team that has made it difficult for their opponents to score this season. Tuesday is the last game of the Cavaliers home stand, and then they will travel to New York Thursday hoping to avenge their opening night embarrassment.

Anderson Varejao participated fully in practice and Blatt seemed confident that Andy will be good to go for the game Tuesday.

Matthew Dellevadova is making progress back from his knee injury, and Blatt was hopeful that Delly would be able to participate in 5-on-5 drills again soon. Very encouraging news for the Cavs bench.