Cavaliers vs. Wizards Game Preview: Can Cavs Stop The Bleeding? 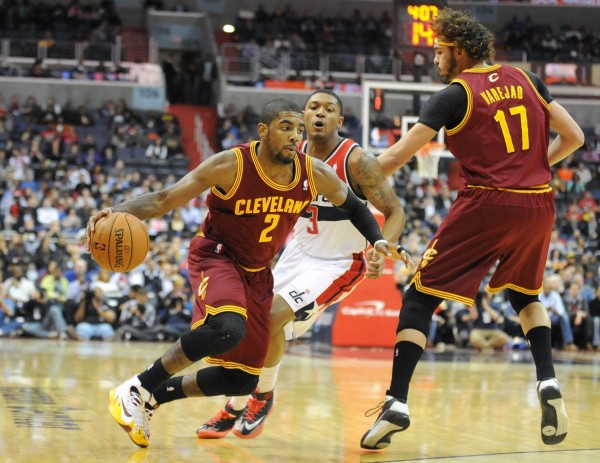 (Washington, DC) — The great homecoming in Cleveland hasn’t exactly gotten off on the right foot. Perhaps a new twist on an old rivalry can spice things up.

LeBron James and the Cleveland Cavaliers (5-5), who have shown flashes of offensive supremacy and at times defensive ineptness, will take on John Wall, Bradley Beal and the Washington Wizards (7-3) Friday at 8:00 pm E/T on ESPN.

The Cavs suffered a disappointing loss to the champion San Antonio Spurs Wednesday night. A fumble by LeBron spoiled a chance to tie or take the lead late in the fourth quarter. With seven seconds left and the Cavs down a basket, James mishandled his dribble and turned the ball over as he attempted to cross half-court. It was the second loss in a row for the Wine and Gold.

“It’s just how the ball rolls sometimes,” remarked LeBron after the game. “I’m not too upset about it.”

Cleveland travels to the nation’s capital to battle an impressive Washington team that just suffered a three-point loss at home to the Dallas Mavericks.  The Wiz’s electric guard Bradley Beal will play in just his second game of the year following wrist surgery last month. Beal sustained the injury in preseason and had 21 points off the bench.

Just a few short years ago this would have been considered a rivalry game. During LeBron’s first stint with the Cavs, Cleveland and Washington met in the first round of the playoffs three years in a row. The Cavaliers won all three series, sweeping Washington in 2007.

“Now that’s a rivalry,” James told chuckling reporters Thursday. “It was great for basketball at the time. It was must see TV.”

It may not be saying much, but Cleveland is coming off arguably its best defensive performance of the season. The Cavs rank 23rd in defensive scoring, giving up 103.1 points per game. They surrendered a season low 92 points to the Spurs on Wednesday.

One of the underlying stories of this game will be the battle at point guard. Kyrie Irving and John Wall could be considered the two best at their position in the Eastern Conference.

According to CBSsports.com, Irving is fourth and Wall sixth when ranked against other point guards in Total Player Rating (a player-rating system determined by different offensive and defensive statistics). Kyrie is averaging 21.9 points while nailing 46 percent of his three-point attempts. Wall is reeling in 18.6 points and swiping a career high 2.3 steals per contest.

If there is a weak link in the ‘Big 3’ chain, it’s Kevin Love. His 16.7 point per game average is his lowest since 2010. His 10.4 rebounds are his lowest since 2009. In his two games against Washington last year, as a member of the Minnesota Timberwolves, Love recorded 25 points and 11 rebounds in each meeting.

“We run specific stuff for Kevin and other guys,” Cavalier’s Head Coach David Blatt told reporters. “Earlier in the season when he was scoring the ball better it was the same offense . . . He needs to be involved and he needs to involve himself, and it’s our job to help him.”

The two teams split four games a year ago. The Wizards own the regular season series record, 105-94.