Why Starting Kevin Love at Center Elevates Cavs to Another Level 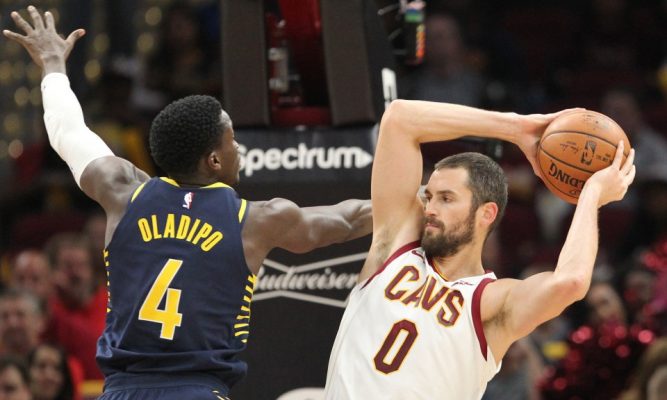 During Wednesday night’s preseason home opener, in a 109-93 loss to the Atlanta Hawks, the Cleveland Cavaliers debuted what amounts to be a brand new team, with Kevin Love starting at center in place of defensive stalwart Tristan Thompson.

Not to underestimate the efforts of the other starters, which included newcomers Dwyane Wade, Derrick Rose, and Jae Crowder, alongside J.R. Smith, but Love’s play at center will determine whether the Cavs are real contenders or still a distant second place to the Golden State Warriors. (Aside from the starters only playing 15 minutes apiece, LeBron James earned a DNP as a precaution for his turned ankle.)

There’s a shortlist of things Love will not bring to the table at center, including rim protection and great individual post defense versus the league’s quicker and/or super-skilled frontcourt players. (Although to be fair, Love isn’t a bad defender, and gives effort.) He will have help off the bench with Thompson, depending on matchups.

Additionally, and somewhat underrated, James will play more power forward than small forward for the first time. Noticeably brawnier than usual at the start of a season, James will enable Love to roam the perimeter offensively and will erase some of the rim protection deficit left with Thompson on the bench. Part of Love’s issue in previous seasons was that both he and James actually needed to occupy the same spaces on the floor.

Now, Love can return to his Minnesota Timberwolves version, where we played more like a 21st century, sweet-shooting hybrid version of Wes Unseld, the Hall of Fame dominating rebounder with outlet passing that enabled easy buckets for the old Baltimore/Washington Bullets.

You can see the comparable aspects of their games in the clips. (Fun fact: Love’s middle name is Wes, after Unseld.)

Another plus will be the Cavs finally taking full advantage of Love in virtually any (and every) pick-and-roll scenario — because he absolutely cannot be left alone, especially if he’s playing with confidence and rhythm. Even if he’s closed out on, Love’s ability to make plays for others (including more dunks and easy post work for James) will be on full display.

Both Rose and Wade can play with more leverage, running downhill with quality Love picks and cuts to the rim. With Love out on the perimeter on screen and rolls, James will have more options as all the bigs will be out of the paint, in space, trying to close out on three-point attempts, or trailing the players out of picks — which most bigs aren’t equipped to do.

The Cavs will give up buckets inside with Love at center. That’s an ugly fact. That said, their length, increased intelligence via the Wade addition, and overall athleticism should negate this deficiency against 90-95 percent of the league.

Can they defeat the Warriors, San Antonio Spurs, or the stacked Houston Rockets with this lineup? It’s hard to say after two preseasosn game in, but it’s evident Love is (probably) the answer.