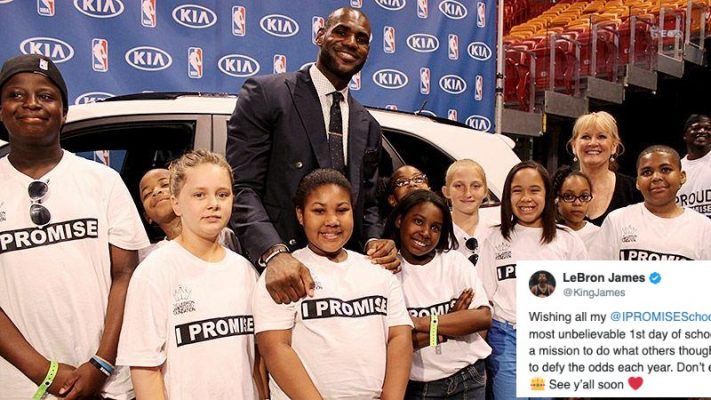 It’s a new school year for the I Promise School and LeBron James made sure that the students, parents, and staff were encouraged on the first day of classes.

James sent out the message on Sunday night to also remind them all of their shared mission.

Wishing all my @IPROMISESchool students, staff, and parents the most unbelievable 1st day of school tomorrow‼️?? We set out on a mission to do what others thought we couldn’t and we’ll continue to defy the odds each year. Don’t ever count out a kid from AKRON ? See y’all soon ❤️

The school opened in Akron, Ohio a year ago through the generous efforts of the LeBron James Family Foundation. Since then, the students have performed admirably, with results showing clear improvement according to Erica L. Green of the New York Times:

“The 90 percent of I Promise students who met their goals exceeded the 70 percent of students district-wide, and scored in the 99th growth percentile of the evaluation association’s school norms, which the district said showed that students’ test scores increased at a higher rate than 99 out of 100 schools nationally.”

The school has longer days and school years which is why it starts its calendar year earlier than most schools. It has a more comprehensive schedule for its students, who are getting the education that they would not have otherwise had if not for the former Cleveland Cavaliers forward. The I Promise School specifically targets at-risk children to keep them from falling behind academically.

A few months ago, James announced that the school received $1 million from the Dick’s Sporting Goods Foundation to fund a new gym.