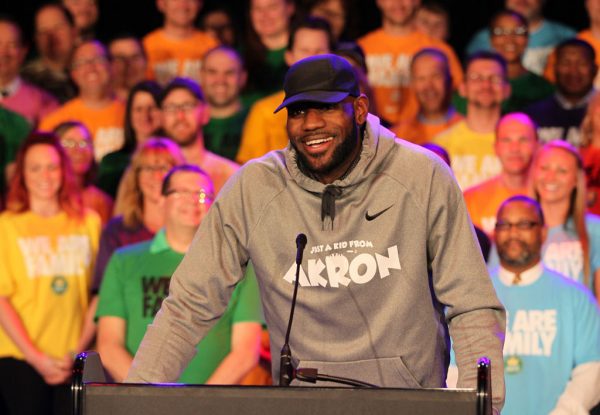 The philanthropic side of Cleveland Cavaliers forward LeBron James has been in evidence for more than a decade, with his LeBron James Family Foundation providing needed funds for less fortunate individuals. One of the areas that James and his namesake foundation has focused on is education, with the latest example of that coming on Tuesday.

Jennifer Conn of Cleveland.com noted that the LeBron James Family Foundation will be working together with the Akron public school system to establish what will be known as the I PROMISE School. The actual creation of a school is the outgrowth of a plan that began in 2011 which sought to reduce the number of students dropping out of school in James’ hometown.

The new school will specifically focus on working with at-risk children, with plans to start with a both third and fourth grade classes and eventually expand to first through eighth grade classes. The students will be selected through a lottery system that was necessary because the number of children in this category exceed funding capabilities.

“We’ve learned over the years what works and what motivates them, and now we can bring all of that together in one place along with the right resources and experts,” James said as part of a news release. “If we get to them early enough, we can hopefully keep them on the right track to a bigger and brighter future for themselves and their families.”

The earlier program targets third graders who are already falling behind, making them prime targets to eventually drop out of school. In addition to help after school, those students work with mentors, while their parents or caregivers meet with experts over a dinner once a month to work out issues. Those that end up graduating are promised full scholarships to the University of Akron.

“As we’ve grown with our families we know it’s not just about the child, it’s about the whole family – and how we keep reaching out to the whole family within our school to help them be a part of their child’s learning,” the foundation’s executive director Michele Campbell said.

James’ prominence has made the development of partnerships that help provide both additional funding and needed volunteers for events an easy situation.

“We’ve seen the positive influence of the LeBron James Family Foundation on our students and we look forward to continuing to do everything we can to put our students in a position to be successful,” said David James, superintendent of Akron Public Schools.

Over the next six months, a plan for the school will be worked out, with the emphasis being on key areas like science, technology, engineering, and math. The goal is to open in September 2018 with third and fourth graders, and first and second graders the following year, before completing the development by 2022 with students through eighth grade.