Kevin Love Reveals Whether Thumb Injury Has Affected His Play 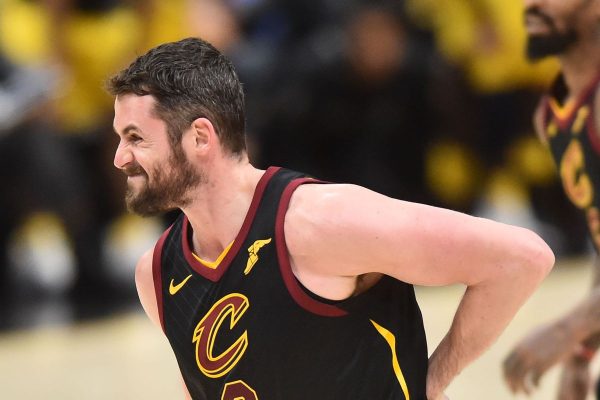 When the Cleveland Cavaliers‘ Kevin Love suffered an injury to his left thumb in Game 2 of their playoff series with the Indiana Pacers, both the team and fans likely had bad flashbacks to the January hand injury that ended up sidelining the veteran for seven weeks. While the injury didn’t cost him any games this time, his shooting struggles in the subsequent matchups has caused concern about whether the thumb has been a source of those problems.

After Tuesday’s practice, Love didn’t really agree with that assessment:

“Not so much,” Love said. “I’ve been able to get up a lot of shots. I think initially it was painful in the few days that followed, but now it’s kind of subsided, and just getting the feeling back in my left thumb.”

Two factors in the contests after the injury that offer some more insight are that in Game 3, he took only two second-half shots after scoring 16 points in the first half and in Game 4, early foul trouble disrupted his rhythm. He’s currently averaging 12.0 points in four games against the Pacers, hitting his shots from the field at only a rate of 36.2 percent. However, his rebounding is showing no signs of any problem, averaging 10.5 thus far in the postseason

Love himself gave credit to Indiana’s Thaddeus Young for defending him well in the series:

“He’s a good defender,” Love said of Young. “It’s definitely been a physical series so far. But you know, Thad has always been a guy that can guard multiple positions and you gotta give him credit.”

With the exception of Game 1, the Cavaliers-Pacers series has been made up of tight battles that have gone to the final minutes of action. Any shooting improvement by Love will aid in helping the Cavaliers advance to the next round.