Kyle Kuzma Says Kevin Love Has Had the Best Summer Ever 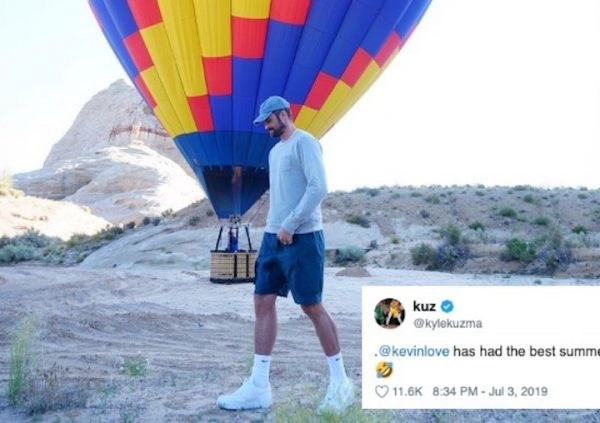 Summer is the season when NBA players get some much-needed rest and relaxation, so it’s no surprise when they are seen taking full advantage of their free time.

Cleveland Cavaliers star Kevin Love’s summer may be the best that any player has had thus far.

.@kevinlove has had the best summer I’ve ever seen anyone have ?

It looks like Kuzma has been following Love’s offseason exploits the past few weeks. From different cities in the United States, to Whistler, Canada, the Cavs forward has been traveling a lot and sharing his adventures on his personal Instagram account for all to see.

Below are samples of Love’s summer escapades.

Club was too short. Swing was garabaaajjj. Shot was trash daddy. Turf slid out from under me. Couldn’t really see the ball…ALL EXCUSES. On another note, a f*cking GLACIER was my driving range today!!! ??⛳️ (And FYI the ball is biodegradable…so don’t have a fit in the comments it’s 2019 people have this shit figured out)

“White Stag”. I’ve had a love affair with this sign since childhood. It never disappoints. To this day I have framed photos of it in my house. Iconic Portland. No matter where life takes me the NorthWest will always be Home. ??? #pdx #oldtown #rosecity

Sunday Brunch @ Sadelle’s. Gotta allow yourself a cheat meal every once in a while. Good for both your mental and physical. List your go to binge below ??????#bringbackfatkevin Oh, and @pr_rwtw good looking out on the ??

He’s even spent some time with former Cavs stars such as Kyle Korver, Channing Frye, and Richard Jefferson.

Got to share the stage with one of my favorite people @kkorv26. Kyle has always been about the right things and continues to make a mark wherever he plays+lives. Our final panel “40 is the New 20” was eye opening. A lot of the talk centered around “longevity” and what that will mean for athletes moving forward. #aspenideas

The Triangle. ? — Happy Birthday @channingfrye —don’t know what you’re doing here but we love you all the same brother—????

But the offseason isn’t just about fun and games for the five-time All-Star. He has also been giving back to the community through talks about basketball, as well as the issue of mental health.

Back home in PDX — Community Give Back. Much love and appreciation to @ryanshepherd12 for letting me come through and speak to the next generation. ?????? #anchordown #musclefactory

You’re allowed to have fun with it!!!!! ?? Panel: “Everyone is Going Through Something” —centered around mental health. DeMar opened the door for so many, including myself, to speak about personal struggles and change the conversation surrounding physical and emotional well being. @demar_derozan #aspenideas ?: Dan Bayer

Simply put, Love is having the time of his life while helping others along the way.

Every player should take some tips on how to spend their offseason from him. Perhaps Kuzma envies him and wants to spend the next few months following Love’s recipe for a fun summer.

Besides, there is still quite a bit of time before training camp begins.