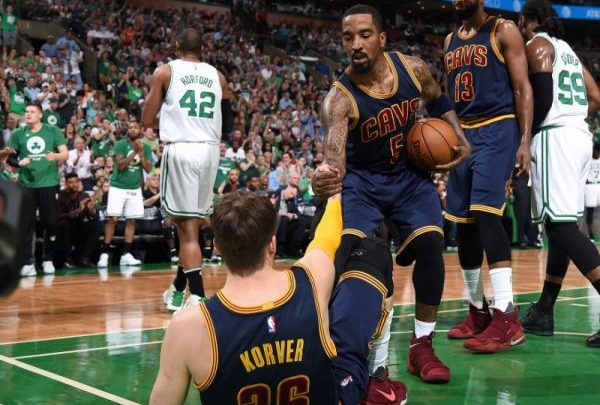 The Los Angeles Lakers are looking to make at least one more big splash this offseason, but even if that does take place, the remaining roster will still need to be filled out.

Considering the playing styles of current Lakers forward and former Cleveland Cavaliers star LeBron James, it is quite likely that the roster will be full of veteran shooters by the time the 2019-20 season rolls around.

In fact, according to a report from Chris Haynes of Yahoo! Sports, two of those veterans could be James’ former Cavs teammates in J.R. Smith and Kyle Korver.

“Kyle Korver is a name who recently got traded to the Memphis Grizzlies,” Haynes said. “I think most people think that eventually he will be bought out, played alongside LeBron James in Cleveland. We all know the Lakers need shooting, that was their Achilles’ heel last year. Shore him up, bring him into the fold, that would be a big boost.

“Another name I want to throw out here: J.R. Smith. Also in Cleveland, also played with LeBron James, helped LeBron win a championship in that year they came back from a 3-1 deficit.

“Look Cleveland, right now they are trying to trade J.R. Smith, and whichever team trades for J.R. for him right now, most likely he will be waived. And when he is waived, it is my belief that he will end up with the Lakers.”

It looks like the Lakers are looking to follow the Cavs’ recipe for success this offseason, and it would be wise to do so.

While it would certainly be a bit odd for Cavs fans to watch those three players suit up together in any jersey other than the Wine and Gold, it would be fun to root for the trio that members of Cavaliers Nation love so well.