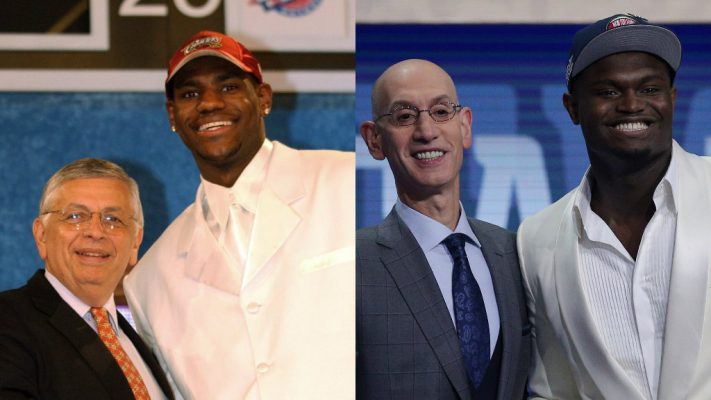 The NBA witnessed the beginning of a new era when the New Orleans Pelicans selected Zion Williamson with the first pick of Thursday night’s 2019 NBA Draft.

The impact that Williamson will generate at the professional level is expected by many pundits to match that of the Cleveland Cavaliers’ own No. 1 pick in the 2003 draft, LeBron James.

Many are hailing Williamson as the best player to come out of the draft since James, and the idea wasn’t lost in the minds of both players.

According to a recent report, the four-time MVP has some things he wants to say to the incoming rookie.

One has to wonder how the two will engage in the days ahead and what that conversation will cover.

James and Williamson will forever be linked, not only by the fact that they were both drafted No. 1 overall, but also by the outfit they wore on draft night.

Williamson wore an all-white suit reminiscent of James’ ensemble 16 years ago when he was selected by Cleveland.

cleveland cavaliersfeaturedlebron jamesnews tickerZion Williamson
← Previous Story Koby Altman Offers Exciting Update on Dan Gilbert After Seeing Him for 1st Time Since Stroke
Next Story → Collin Sexton Believes He and Darius Garland Can Be Next Damian Lillard and C.J. McCollum