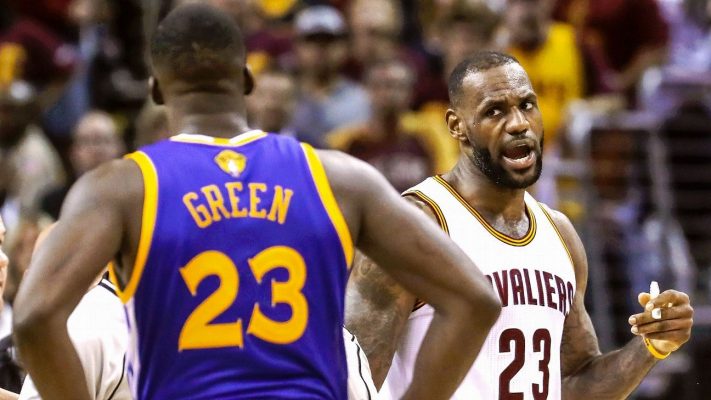 Having dropped three of the first four games of the 2019 NBA Finals, the Golden State Warriors are just one loss away from being dethroned by the Toronto Raptors as league champions.

In an effort to stop that from happening, Warriors forward Draymond Green is using some unusual motivation: the 2016 NBA Finals comeback by the Cleveland Cavaliers over his Warriors.

Draymond Green: "I've been on the wrong side of 3-1 before. Why not make our own history?"

Of all the Warriors’ players on the 2016 roster, Green likely has the clearest memory of watching that 3-1 lead disappear. That’s because it was his suspension from Game 5 of that series that helped the Cavaliers start their comeback.

Without Green in the lineup for that contest, the Warriors had no answer for the Cavaliers’ tandem of LeBron James and Kyrie Irving.

By the end of the Cavs’ 112-97 Game 5 victory, James and Irving had each scored 41 points and gained the momentum they needed. A 93-89 victory in Game 7 then made the Cavs the first NBA team ever to comeback from a 3-1 deficit in the Finals.

Unlike their four previous finals battles against the Cavs from 2015 to 2018, this year’s Warriors have been plagued by injuries to key personnel. Forward Kevin Durant, who was Finals MVP in each of the past two years, has yet to play in the series, while guard Klay Thompson was forced to sit out Game 3 of the series. That game was won by the Raptors, 123-109.

Given Green’s frequent disdain for the city of Cleveland, it’s highly unlikely that many Cavs fans will be rooting for the Warriors to forge such a comeback. If the Warriors can’t match the Cavs’ feat from three years ago, those fans may be able to gain some consolation in watching Green walk off the court while another team celebrates a title.