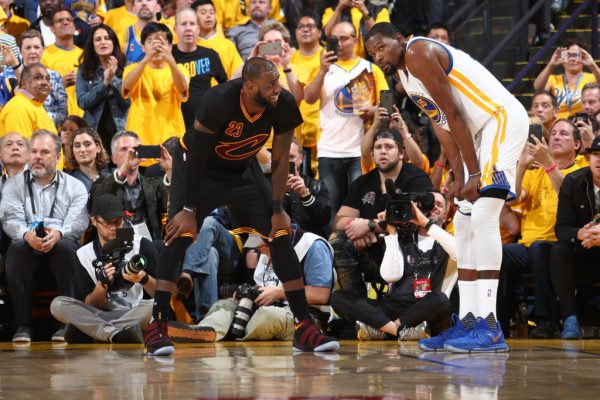 In the summer of 2016, Kevin Durant ruffled lots of feathers when he joined an already great Golden State Warriors team.

They proceeded to win the NBA championship against LeBron James and the Cleveland Cavaliers in 2017, and according to Draymond Green, that’s when Durant started to change.

“We win a championship, Kevin wins Finals MVP,” said Green. “In my opinion, he got the best of ‘Bron that series like Kevin was f—– rockin.’ … After that, that was kind of that moment of like, ‘Damn Kevin should be the best player in the NBA now because of what he just did to LeBron.’ It’s like, you turn on the TV the next day, and the f—— headline is, ‘LeBron James still the best player in the world, question mark.’ You got Stephen A. [Smith], you got all these people debating it, and everybody still says LeBron James is the best player in the world. That’s when I kind of felt like it took a turn, and then we came back 2017-2018 season, and Kevin just wasn’t as happy.”

Just about every Cavs fan knows that James averaged a triple-double in the 2017 NBA Finals, which gives credibility to the claim that he was still the best player in the world despite losing the championship.

However, Durant was also a monster in the series, averaging 35.2 points, 8.2 rebounds, 5.4 assists and 1.6 blocks per game while shooting a red-hot 55.6 percent from the field.

The supposed friction between Durant and Green last season in Golden State has been well-documented, and perhaps the writing was on the wall about Durant’s impending departure.

One can only speculate how much success the Warriors could’ve had beyond this season if Durant decided to stay, especially now that the team will have a high draft pick.